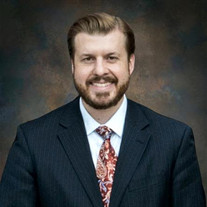 On November 21, 2019, Aaron Phillip Barker passed away unexpectedly in a car accident. He is survived by his wife Jacinta “Joey” Lujan Barker, his children Lyla Barker (10), Lorelai Barker (8), Llewelyn “Lulu” Barker (6), and Atticus Barker (4); his parents Stephen and Glenda Barker; his siblings Rebekah Barker, Michael Kelly (Thomas), Maren Greathouse, Jeffrey Barker, Samantha Lachowsky (David), and Tasha Firth (Cornell), Numerous Aunts, Uncles, cousins, nieces and nephews. He is preceded by his beloved daughter Lavender Juliet Barker, sister Meda Barker, grandparents Ronald and Geraldine Barker and Rodney and Dorothy Ball. Aaron was born on July 29, 1979 to Stephen and Glenda Barker in Salt Lake City, Utah. Growing up, if there was a disagreement among siblings, Aaron was likely to be involved. Who could have predicted that the cuddliest and most affectionate baby would grow into such an inveterate debater? Aside from a fierce debate, Aaron enjoyed performing in concert choir and school musicals. A heart problem in his youth led him to become an avid runner as well, and he was often chosen by his peers to partner with them in group singing numbers, or to pace them in long-distance endurance races. His competitive spirit was tempered with a strong work ethic, a sense of responsibility for the growth and happiness of those around him, and a compelling and charismatic voice, whose stories could command the attention of the room. When Aaron was young, he attended the Granite School District’s Mill Hollow Recreation Center in the Uinta Mountains with his school class. He has such a positive experience that he returned as a cabin counselor when he was 17 years old. Transformed into his beloved alter-ego, “Fungi” ruled over Cabin 6 - the cleanest cabin in the campus - for the next several summers. Aaron led campfire programs that became the thing of legends. He was a hero to the camp kids, a friend to his fellow counselors, and a romantic figure for many. From solo night hikes to snowmobile trips, to incredible friendships, Mill Hollow was his home away from home. His passion for Mill Hollow extended beyond young adulthood, as he led the fight to keep Mill Hollow operational after the Granite School District ended the program, wanting kids to still have the opportunity to experience the impact that Mill Hollow had in his formative years. He honorably served a Spanish-speaking mission for The Church of Jesus Christ of Latter-day Saints in the South Dakota Rapid City Mission. He gained a reputation as a steady and reliable missionary who was frequently tasked with mentoring other elders having trouble adjusting to the work. He also gained a deeper understanding of the challenges in the world that face people and pondered the ways in which he might best serve those with access to fewer resources than he was afforded. This, in part, led him to pursue a career in law. Driven to understand others on a more fundamental level, he completed a Bachelor’s degree in Psychology and Business at the University of Utah. Shortly before his death, he had completed his Juris Doctorate at the University Montana Alexander Blewett III School of Law, a degree he hoped to use to assist the communities he served on his church mission in his younger years. He also aspired to continue his Grandfather’s law business with his cousin, a dream that will unfortunately never come to fruition. Beyond all of his accomplishments and experiences, Aaron honored his wife and children with his deepest reverence. His devotion to his beautiful family simply eclipsed the compassion and understanding he imparted as a student, missionary, lawyer, and friend. Aaron reminded his wife each day that she was loved, infinitely and unconditionally, committed to building the lives of their dreams. He was an amazing father to his children - joining imaginary games, singing along to Disney movies, or cooking together—he shared with them his best attributes. He loved his family fiercely and whether it be with the weekly phone calls when he was traveling on business or away for school, teasing them out of their doldrums or tantrums, or joining them on Pokémon Go, he made sure to stay connected no matter the distance between them. Aaron led with compassion and kindness. He was a great son, brother, father, husband, uncle, cousin. He would be embarrassed by our outpouring of emotion and grief. However, he would also have opened his heart to assist us with our pain, then teased us until we laughed. The world is the dimmer without him. He was taken from us too early, but his light shines through all of us and especially his family and his children, the driving force behind everything he did. While he is no longer with us, we know he would wish to impart some words of wisdom during such a difficult time. So, in his immortal words, “Skate or die.” Services are located at The Church of Jesus Christ of Latter-day Saints on 4842 W Vermillion Drive South Jordan, UT 84009 Services will start at 10 am on Saturday, November 30, 2019. In lieu of flowers, please send donations to the family by using the Mill Hollow or Family Friends GoFundMe fundraising campaigns, or make a donation in Aaron’s name to the Refugee and Immigration Center for Education and Legal Services (RAICES).

The family of Aaron Phillip Barker created this Life Tributes page to make it easy to share your memories.