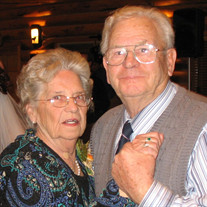 "Together Again" Adrianus J. Grandjean passed away peacefully surrounded by family on July 23, 2017 in Salt Lake City, Utah. He was born April 8, 1929 to Johannes and Maregaretha Johanna Grandjean in Delft, Netherlands. Adrianus married Adriana DeBruin on November 18, 1953 in the Netherlands. Together they four children, Jeannette, Adrianus Jr., Peter and Danny. They later moved to the United States in 1959 under a sponsorship from Pete Harmon working with Kentucky Fried Chicken. He later started working for Eimco Mining and Machinery as a heat treater. Adrianus enjoyed spending his time outdoors fishing, camping and tending to his garden, especially when his family was around. Taking time to teach his children and grandchildren how to enjoy life. His keen sense for detail produced beautiful handcrafted wooden projects. One of which is a Dutch windmill that is still resting in his front yard. He is preceded in death by his wife of 64 years, Adriana; parents; sisters, Margaretha Boogaard, Trudy Newman and Corrie Roelofs. He is survived by his children, Jeannette Miller, Adrianus Jr., Peter (Jo) and Danny; grandchildren, Travis, Traci, Stacey, Elisha (Jessie Sr.), Jenny, Brittany, John and Cody; great grandchildren, Isaac, Jessie “Junior”, Dayton, Cambrianne and Isabella; sister, Johanna Vera Maloney and brothers, Brent C. Grandjean and John Grandjean. The family will have a private celebration of life on August 6, 2017 from 1:00 pm to 5:00 pm, for more information please email Peter at [email protected] Special thanks to our sister-in-law Susan for being there all this years.

The family of Adrianus J Grandjean created this Life Tributes page to make it easy to share your memories.