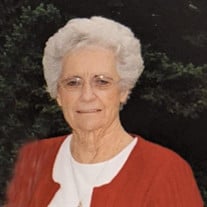 Aileen Taylor Lake - Funeral Service Zoom Link Dec 17, 2021 09:00 AM Mountain Time (US and Canada) Https://zoom.us/j/98070463713?pwd=OTVQdk9yS3Nka25qa2puNVVZNWIrdz09 Passcode: Hillcrest Webinar ID: 980 7046 3713 Passcode: 690641885 Aileen Taylor Lake, 95, a beloved wife, mother, grandmother, and great-grandmother, passed away on December 10, 2021. Aileen was born in Grover, Wyoming on July 31, 1926. She married George Halvor Lake on February 5, 1946, and was sealed to him in the Salt Lake Temple on February 5, 1952, their sixth wedding anniversary. Together, Aileen and George raised three children—Jolene, Connie, and Brent. They also took in Doug Walker when he was a teenager and shared a home with him for nearly fifty years. Aileen's strong work ethic began as a young girl in Star Valley where she worked in her father’s grocery store and sold and delivered the Saturday Evening Post. After high school, she earned a cosmetology license and worked as a beautician for several years. After obtaining a business degree from LDS Business College, she went to work for Aluminum Lock Roofing. She did all this while being a crucial part of the businesses she and her husband owned. They included several service stations, a towing company, and a used car lot. Aileen was artistic and creative. She was a skilled seamstress and sewed not only her daughters’ school clothes but their wedding dresses. She was a talented painter, and she enjoyed golfing and bowling into her nineties. Aileen was an active member of The Church of Jesus Christ of Latter-day Saints. She served as a Young Women’s Camp Director for many years and played a major role in developing the Red Spur Girls Camp. She served many missions for her church including a service mission in the Rose Park area and multiple missions at the Conference Center at Temple Square. Aileen’s greatest joy was spending time with her family—at Christmas celebrations, during Sunday dinners, and at her grandchildren’s concerts and athletic events. She will be missed deeply. Aileen is survived by her daughter Connie (Tim Allen), her son Brent (Sheri), her son-in-law Charles Rice, her nine grandchildren, her twenty-eight great-grandchildren, and her one great-great grandchild. She is preceded in death by her parents William Aquilla Taylor and Edna Verba Taylor, her husband George, her daughter Jolene, her brother Val, and her “adopted” son Doug. Services will be held Friday, December 17th from 9:00–10:00am at the Hillcrest 2nd Ward Chapel (8735 Harvard Park Drive, Sandy, UT 84094). Viewings will be held at the same address on Thursday, December 16th from 6:00-8:00pm and Friday, December 17th from 8:00-9:00am. The interment will be held at the Utah Veterans Cemetery and Memorial Park in Bluffdale.

The family of Aileen Taylor Lake created this Life Tributes page to make it easy to share your memories.