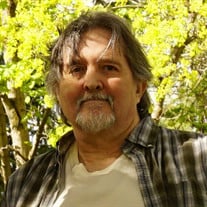 Alan Richard Denison passed away on July 3, 2017 in West Jordan Utah. He was born April 14, 1955 in Salt Lake City Utah to Richard I. Denison and Donna M. Kimball. He married the love of his life, Shelly Dawn Denison on July 17 1980. They were sealed in the Salt Lake Temple in Salt Lake City. Alan attended the University of Utah were he expanded is mind and life. He was a member of Toastmasters International and loved to speak in public. He felt that inspiring people was more important than just believing in them and hoped to inspire the world to be the best of themselves. He was employed by Dicrotech where he made beautiful glass holograms that would dazzle the eyes and envelop the mind. He was also employed by American Express as an analyst prior to becoming ill. Alan was always interested in a battle of wits and had the talent of the tongue, taking the opposing side in whatever conversation he could, challenging others to see from a different perspective. Even though he was sick for such a long time, he never stopped expanding his mind and growing spiritually. He was also a talented, accomplished and dedicated writer. His book “Guess Who Wants to Eat You For Lunch” (A Missionary Guide to Anti-Mormon Tactics & Strategies) was published in 1999. He wanted to teach, those who desired, how to defend the faith with love to those who are in danger of losing theirs. Alan was a pioneer by being one of the first “Stay at Home Dad’s”. His greatest joy was raising his beautiful daughter who was the apple of his eye. Teaching her everything he knew and training her to become the great superhero he was. He loved being a dad and was always there for his little girl.He was a loving and caring husband always bringing out the best in his lovely wife. He kept the spark alive by asking his wife out on dates and leaving little notes of love and encouragement in hard times. No one could have loved better. Alan battled for 27 years with unbelievable pain and anguish. After fighting the good fight and overcoming all that he endured he finally defeated the enemy and claimed victory over the battle. He is survived by his spouse Shelly Dawn (Morgan) Denison, Daughter, Jamie Dawn Denison, Mother, Donna M. Kimball, Brother, Jeff Denison, Brother, Roger Dickenson and Sister, Christene Dickenson. Preceded in death by Father, Richard I. Denison, Sister, Rebecca M. Denison and Daughter, Baby Girl Dension. For those who would like to pay their respects and honor a great man, A viewing will be on Friday July 7, 2017 from 6:00-8:00pm. The service will be held on Saturday July 8, 2017 with a viewing from 9:30-10:30am and funeral services being from 11:00-12:00pm. Both will be at the River Oaks 4th Ward, 8950 S. 1300 W. Shelly and Jamie want to thank all the friends and family that have sent their condolences, prayers and support at this most difficult time. They would also like to express their gratitude for all the wonderful care the doctors, nurses and receptionists have given Alan throughout his illness.

Alan Richard Denison passed away on July 3, 2017 in West Jordan Utah. He was born April 14, 1955 in Salt Lake City Utah to Richard I. Denison and Donna M. Kimball. He married the love of his life, Shelly Dawn Denison on July 17 1980. They were... View Obituary & Service Information

The family of Alan Richard Denison created this Life Tributes page to make it easy to share your memories.