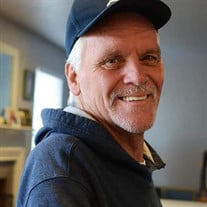 Alan Dal Jorgenson, 72, passed away in the early morning of July 18, 2019 in Magna, Utah. He was born August 24, 1946 in Preston, Idaho to Donna and Herald Jorgenson. Dal accomplishments were graduating from Lehi High School in 1965, after graduation he studied in barber school. In 1979 he worked for Wheeler where he retired in 2001. After retiring he volunteered for the Intermountain Medical center in their emergency department and NICU. Dal was a simple man, he was the best friend you could ever have, he had a smile that would light a room, and a laugh that was so contagious. He enjoyed classic car shows where he would bring his cars to, he loved spending time with his family and watching his grandchildren sporting events, he loved basking in the sun at Murray Park and Wheeler Farm. He enjoyed old Western Movies and The three stooges, he would always get up in the early morning to have breakfast and coffee with his brother Chuck and friends. He loved going to the movie theatre to watch movies and driving to Idaho to get lottery tickets. He also had a fascination for turquoise that he would always wear. He was survived by his children, Brandon(Amanda), Elisha(Justin), and Adam(Kandace) Archuletta, his grandchildren Jax, Talan, Kollin, Karsyn, Ika, Brooklynn, Halden, and Oaklee, his brother Charles Jorgenson, sister, and soo many more family and friends. He proceded in death by his son Damon Dal Jorgenson, and his sister Lonna Jean Jorgenson. Services will be held at St. Joseph the Worker Catholic Church on 7405 South Redwood Road. On July 25th at 10AM-11AM. Mass to follow. There will be a luncheon to follow the Mass at A Pavilion in Murray Park.

Alan Dal Jorgenson, 72, passed away in the early morning of July 18, 2019 in Magna, Utah. He was born August 24, 1946 in Preston, Idaho to Donna and Herald Jorgenson. Dal accomplishments were graduating from Lehi High School in 1965, after... View Obituary & Service Information

The family of Alen Dal Jorgenson created this Life Tributes page to make it easy to share your memories.

Alan Dal Jorgenson, 72, passed away in the early morning of July...