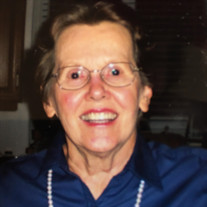 Alice Weaver Martin passed away peacefully on February 12, 2016 in Spanish Fork, Utah. She was 79 years when she passed. Born on September 29, 1936 in Williamsport, PA to Henry Clay McCormick Longacre and Pearl Roberta Weaver. She was the oldest of 5 children along with her four brothers. Alice was married to Dalton Lee Hoffman on June 22, 1958 at Camp Hill, Pennsylvania. They had four daughters together. Alice was married and sealed to Joseph Berkeley Martin on July 26, 1985 in the Los Angeles Temple. They had happy times growing and learning from each other. Alice loved to do genealogy, temple work, and spending time with her children and grandchildren. She was a talented homemaker. She had skills in cooking, baking, sewing, gardening and raising us in the gospel. She also earned her pilots license. She loved taking her daughters and grandchildren on vacations, planning parties and going on special dates with them. Alice is known for her strong testimony and love for her Savior. She loved the temple and served as a temple worker. Alice is survived by her brothers Clarence, Howdy, Robert and David Longacre. She is also survived by her daughters Tara Bushman(Brad), Trina Ward(Bret), Tracy Hiatt(Chadd), Tammy Hokanson(Rory) and by 21 grandchildren and 2 great-grandchildren. She is also survived by Terry Martin(Betty), Dennis Martin, Gary Martin, and Gail Miller(Tom). She was preceded in death by Dalton Lee Hoffman, Joseph Berkley Martin and Gayle Martin. Funeral Service will be held on Friday, February 19, 2016 at 10:30am at the LDS church 3477 E. River Bottoms Rd, Spanish Fork, Utah. Viewing is at the same location from 9-10am. Services under the direction of Serenity Funeral Home. Thank you to the family and friends who have been there for our families and have shared the beautiful memories of our Mom.

Alice Weaver Martin passed away peacefully on February 12, 2016 in Spanish Fork, Utah. She was 79 years when she passed. Born on September 29, 1936 in Williamsport, PA to Henry Clay McCormick Longacre and Pearl Roberta Weaver. She was the oldest... View Obituary & Service Information

The family of Alice Weaver Martin created this Life Tributes page to make it easy to share your memories.