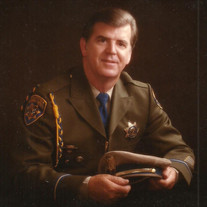 Al Parker Allen B. Parker, 79, passed away peacefully surrounded by his family and close friends on Tuesday, January 27, 2015 after a brief and valiant battle with non-Hodgkins lymphoma. He was born on June 8, 1935 in Corcoran, California to Wayne B. and Vera Allen Parker. He married the love of his life and high school sweetheart, Marilyn Alt, on June 14, 1953 in Sacramento California.They were later sealed for time and all eternity in the Los Angeles California Temple on October 31,1959. Al’s life was one of cheerful and willing service. He had a distinguished career as a California Highway Patrolman for 30 years. He was a traffic officer for most of that time, helping others to stay safe and be comforted in times of trouble. The last 11 years of his career, he worked as protective service for the Lieutenant Governor of California. He traveled extensively with Lieutenant Governor Leo T. McCarthy to several countries and associated with other security officers from many different agencies, including the FBI, CIA, and Secret Service. He helped to protect state and national officials as well as foreign dignitaries. In each of his assignments, he showed true integrity paired with his own sense of humor to make the jobs enjoyable for himself and those with whom he served. He has remained active as a retired patrolman, supporting his fellow officers. Al was an active member of The Church of Jesus Christ of Latter-Day Saints. He served in many capacities, among them seminary teacher, bishop’s counselor, bishop, member of the stake presidency, and high councilor. He magnified each calling that came to him and touched innumerable lives for the better. His experience in security gave him the opportunity to help LDS church authorities when visiting his home area in Sacramento. Among other assignments, he was privileged to assist President Hinckley when selecting a site for and when dedicating the Sacramento Temple. Most recently, Al found much joy in serving with his sweetheart as an ordinance worker in the Provo Temple. His cheerful disposition and positive nature were infectious in his work, church service, and home life. Al’s real joy has always been his family. His wife is truly his eternal companion, the very light of his life and the wind beneath his wings. He loves and cherishes his children, grandchildren, and great-grandchildren. In addition to his eternal family that is sealed together, Al considered many of his friends to be “family by love.” He is especially loved for his gentle teasing of the children and his good-natured ribbing of the teenagers. Al is survived by his wife, Marilyn; three children - Wayne (Julie) of Provo, Cheryl Winfree of Springville, and Dorothy “Dodie” Parker of Payson; 11 grandchildren, and 9 great-grandchildren (with one on the way); his sisters, Patricia Green and Wynette Gardner, 5 nephews, and 5 nieces. Al was preceded in death by his parents, and his brother, Roy Walter Parker. No doubt they have had a joyous reunion. A viewing will be held on Monday, February 2 from 6 to 8 pm, at the Payson 11th Ward Chapel at 902 West 400 North Payson, Utah. Funeral services will be held at the same location on Tuesday, February 3 with a viewing from 9:30 to 10:30 am and service to begin at 11:00 am. Al’s family would like to express their sincere gratitude to the staff at Utah Valley Regional Medical Center for their compassionate and respectful care of Al and his family during his last days on this earth. Your service to us was remarkable and made the most difficult days easier to bear.

Al Parker Allen B. Parker, 79, passed away peacefully surrounded by his family and close friends on Tuesday, January 27, 2015 after a brief and valiant battle with non-Hodgkins lymphoma. He was born on June 8, 1935 in Corcoran, California to... View Obituary & Service Information

The family of Allen B. Parker created this Life Tributes page to make it easy to share your memories.