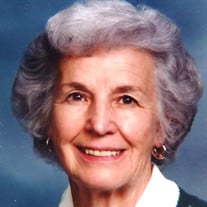 Anna Merlynn Droubay Barrus, 87, died peacefully on November 19. Merlynn was born on Nov. 20, 1927 in Erda, Utah to John and Annie Droubay. By all reports, she had a mild and even temperament from the start. Growing up on a dairy farm, she learned the virtues of hard work and responsibility early. After graduating from Tooele High, she attended the University of Utah where she studied early childhood education. She married a Tooele boy, George Barrus, in the Salt Lake Temple on Dec. 3, 1948. In the midst of raising a large family, she was a sea of calm. She baked wonderful bread and made delicious pies and was almost always there when the children came home from school. Merlynn served faithfully in a multitude of church callings from Den Mother to Stake Relief Society president and fed and helped countless people throughout her life. She also made time to serve as a PTA president, a candy striper, a member of the Provo City Planning Commission, and as a foster Grandmother. George’s work moved them to Idaho, Arizona, Iowa and several cities in Utah until they finally settled in Provo where they lived for 44 years. In 1994, Merlynn was pleased to complete a B.A. in English at BYU. Despite being a farm girl at heart and a homebody, Merlynn spent years globetrotting with her husband: BYU semesters abroad in Paris and Vienna, internships in Washington, DC and New York, and LDS missions to Newfoundland, Johannesburg, and Singapore. Her life was devoted to her family, her faith, and those around her. For the last two years of her life, she and George moved to West Lafayette, Indiana where they lived with their daughter Michelle and her family. She is survived by her husband George Barrus, her brother Wendell (and Geraldine) Droubay, sister-in-law Bonnie Droubay, and sister Bertha (and Dwight) Clark, her children Craig (and Monica) Barrus, David (and Sharon) Barrus, daughter-in-law Anna Leesa Stanley Barrus, Kent (and Katherine) Barrus, Brenda (and Brent) Christensen, Lee (and Cammie) Barrus, James (and Alisa) Barrus, Michelle (and Tad) Brinkerhoff, 31 grandchildren and 25 great-grandchildren. She was preceded in death by her son John, brother Robert Droubay, and sisters Ruth Bryan and Kathleen Bradshaw. A viewing will be held Friday, November 28th, from 6:00-8:00pm at the Grandview 13th Ward chapel, 1260 W 1150 North, Provo. Funeral services will be at the same location Saturday, November 29 at 11:00am with a viewing preceding services from 9:00-10:30am. In lieu of flowers please donate to the LDS Humanitarian Fund.

Anna Merlynn Droubay Barrus, 87, died peacefully on November 19. Merlynn was born on Nov. 20, 1927 in Erda, Utah to John and Annie Droubay. By all reports, she had a mild and even temperament from the start. Growing up on a dairy farm,... View Obituary & Service Information

The family of Anna Merlynn Droubay Barrus created this Life Tributes page to make it easy to share your memories.