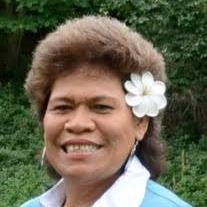 Apaula Peala Matagi, 55, passed away July 01, 2015 at her home in Orem, Utah. Born April 06, 1960 to Lagaula Kalameli Tuiloma and Peala Avei. She married Tafilele Fatu Matagi in Hawaii on Dec 11, 1982. Our Queen, Dear Mother, Sister Apaula Matagi is the eldest of 16 children of Peala Avei and Lagaula Kalameli Tuiloma Avei from Fusi Vaimaga, Safotulafai. In her early ages she had a goal to serve a mission. While in form two (junior year in high school in Samoa) at Pesega High School her mother asked Apaula to leave school in order to help her families survival. And of course she obeyed. Sister Apaula Matagi had returned with honor in Apia Samoa Mission in 1980. Upon returning from her mission she received a letter from her Uncle Isaia Tuiloma to leave on the next flight to Hawaii. However, Sis Apaula Matagi wrote back to her Uncle telling Uncle that she will not leave Apia, Samoa without her parents and siblings. In 1980 through faith she took her entire family from Apia, Samoa to Hawaii. While in Hawaii Sis. Apaula Matagi passed the Asvab test. Sister Apaula Matagi was one of two participants that have been selected for passing an academic achievement for the Air Force Military Base. Unfortunately, her service to the world was on hold she stayed back and took care of her siblings and family. Sister Matagi always puts her loved ones first before herself. Sister Matagi’s most exhilarating moments was attending the LDS First Annual General Conference in Salt Lake City in 1980 where Prince Tafilele Matagi introduced him to Queen Apaula Matagi. Queen Apaula’s first son was born in Anaheim, California. In 1984 they’ve moved to American Samoa and resided in the village of Pago pago. Together they built a strong relationship with the Lord and his gospel through The Church of Jesus Christ of Latter Day Saint. For 47 years she devoted her life through her missionary work and a full time mother for her kids and the rest of her family. Many lives have been blessed with her good works and acts of kindness. She would regularly travel with her husband to Apia Samoa Temple where her family was sealed for all time and eternity in 1990. In the year 2000-2002, Sis. Apaula Matagi was recognized with an Award of recognition for 100% in her Visiting Teaching. In 2007 Sis Matagi’s family had a gradual change to Provo, Utah. They were called to serve the Lord as temple workers from 2007-2015. Sis Matagi sealed her youngest son in Provo Temple 2010. In Dec of 2012, Sis. Apaula Matagi was recognized with honor in receiving her diploma of Master’s Degree of the Celestial Kingdom and therefore continued her compassion service to her friends, family and community. In May of 2013 she was blessed to become the resident of Utah. Sister Apaula Matagi is a survivor of 28 years old uterine cancer found in Oct 2014. On July 01, 2015 at 12:10AM the Lord called our Queen, Dear Mother, Sister Apaula Matagi for behold he has greater and important plans for our Queen, Dear Mother, Sister Apaula Matagi on the other side. Preceded in death by Lagaula Kalameli Tuiloma Avei (deceased March 2010) Survived by Tafilele Matagi (husband), Loimataoapaula . Matagi (daughter), Puapuaga R. Matagi (daughter), Nephi P. Matagi (son) [Orem,Utah] ; Zion J. Matagi (son) and Sherilyn (best daughter-in-law), Grandkids; Cianna A (granddaughter), Maliah A(granddaughter), Jabari T (grandson) and ZJ Maez (grandson); Peala Avei (father) and family [Highland, Utah] ; Mom Emma Maez and family [Roy,Utah] Service: July 07, 2015, Tuesday 8AM Family View following family service and 11AM Funeral Service following Graveside Burial in Highland Cemetery. Thank you to our dearest friends, families and to Orem 9th ward for the love and support that we’ve all shared with Sister. Apaula P. Matagi, our mother. Thank you again for your Alofa. May the Lord continue to bless your families abundantly! Fa’afetai Tele Lava mo le Agalelei. “True Love Lasts Forever.” (Moms favorite quote) Sis. Apaula Matagi’s obituary found on www.serenityfhs.com Services are under the direction of Peni Malohifo'ou of Serenity Funeral home

The family of Apaula Peala Matagi created this Life Tributes page to make it easy to share your memories.