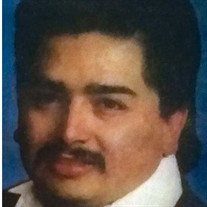 Apolinar “Polo” Ojeda 1956-2016 Apolinar “Polo” Ojeda, our beloved father, brother, grandpa and friend, age 60, passed away on Monday, December 5, 2016 at home surrounded by his family. He was born July 23, 1956 in Manzanillo, Colima, Mexico, the third of six children of Faustino Ojeda and Maria Cervantes Cuevas. He married Maria Rodriguez, and together they had three beautiful daughters. She passed away in 1995. He married Karen Ojeda, later divorced, but they remained close friends. Our father was a very funny man and his family loved being around him. He was great at giving advice to his daughters and their families, and enjoyed taking care of his grandchildren. He was able to open a successful store called Las 3 Renas. Polo is survived by his siblings Maria del Refugio, Francisco, and Martha Ojeda-Cervantes; his daughters Erica Woody, Cynthia Barajas, Janneth Ojeda; and his grandchildren Robert Jr., Jacqueline Woody, Mario Wayman, Pedro Jr., Jose, Daisy Barajas, Carlos, Marisol Bahena. He was preceded in death by his loving parents Faustino and Maria, and his siblings Faustino Ojeda and Maria Natividad Ojeda. A time of gathering will be held on Wednesday, December 14, 2016 – Rosary from 10:00 to 11:30 a.m., and Mass at 12:00 noon at Our Lady of Guadalupe Church located at 715 West 300 North, Salt Lake City, Utah. The family would like to thank friends and family who helped us celebrate his life. Our father was a very strong man and he will be missed by all of us. We know he’s flying high up in heaven and is no longer in pain. We love you, Grandpa! Please share memories and condolences at www.serenityfhs.com. Nuestro padre era un padre muy fuerte y siempre esta en nuestros corazons, y siempre lo vamos estrañar los momentos que vivimos con el porque siempre los hiso sonreír.

The family of Apolinar "Polo" Ojeda created this Life Tributes page to make it easy to share your memories.