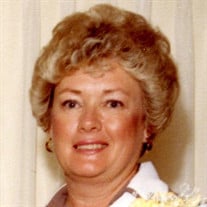 Arleen Morrill, 78, passed away October 17, 2015, in Taylorsville, Utah, near her dear husband of 62 years, her children, grandchildren and great grandchildren. Arleen was born on April 16, 1937, in Milford, Utah to Willis Grant and Barbara Johnson Whitbeck. Growing up in a small town with her two sisters fostered a tenacity and spirit in Arleen that stuck with her throughout her life. An entrepreneur, Arleen owned Wil-O-Whit Dairy and turned her love of retail therapy into a secret shopping business. She also worked managing offices for medical professionals. She valued service in her community and church, serving as PTA president and in various church callings. She was a loyal neighbor and friend and was always attending to the people she loved. With a love for fun, Arleen was quick to plan family vacations and parties. She especially enjoyed traveling to Jackson Hole and Yellowstone with her husband, children, and grandchildren. Arleen could bowl with the best of them, and would give anyone an earful for talking badly about her beloved Denver Broncos. She always had some straightforward advice, a cold Coke, and her Nordstrom card at the ready, making her a favorite among her grandchildren. Arleen is survived by her husband Donald “Clark” Morrill, her children Debbie (Val) Hacker, Russ Morrill, Staci (Tony) Arnone, Mike (Kelly) Morrill, Kyle Morrill, 23 grandchildren, and 22 great grandchildren, and her sister Belva (Randy) Parr. She is preceded in death by her son Stephen, parents, sister Granetta Breeze, and two grandchildren. Funeral services will be held Wednesday October 21, 2015 at 11:00 am at the Brookshire Ward, 1327 W 5550 S. Viewings will be held Tuesday 6:00 – 8:00 pm at the ward and again Wednesday 9:30 to 10:30 prior to the services. For more information go to www.serenityfhs.com

Arleen Morrill, 78, passed away October 17, 2015, in Taylorsville, Utah, near her dear husband of 62 years, her children, grandchildren and great grandchildren. Arleen was born on April 16, 1937, in Milford, Utah to Willis Grant and Barbara... View Obituary & Service Information

The family of Arleen Morrill created this Life Tributes page to make it easy to share your memories.