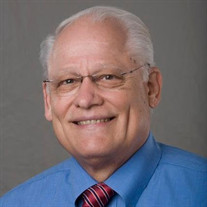 The family of Arthur I Dow III created this Life Tributes page to make it easy to share your memories.

Arthur I Dow III, was born in Los Angeles, California on September...