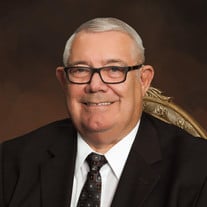 Arvin Lee Hansen passed away and returned to his eternal family on Wednesday, August 23, 2017. He was in the company of his beloved family at his home in St. George, Utah. Arvin was born on the kitchen table at the family home in Dayton, Idaho on August 28, 1943. His sister, Aileen, who was an R.N. assisted with the birth. There wasn’t time to get to the hospital in Preston. His parents were Joseph Heber and Eliza Ann Godfrey Hansen He attended schools in Dayton, Idaho and graduated from West Side High School where he served as the student body president for the class of 1961. He was active in music and sports. He furthered his education by attending Ricks College, Utah State University and California College of Mortuary Science. While attending Ricks College, Arvin was privileged to sing several solos in the production of The Messiah and La Traviata. He loved to play, “Bugler’s Holiday” on his trumpet. While attending to business at Magic Valley Hospital in Twin Falls, Idaho, Arvin met Sherrill Hauser who was an R.N. there. They were sealed for time and all eternity in the Logan L.D.S. Temple on March 9, 1965. Each year near that date they attended the temple. Arvin was in the funeral business for over 50 years, proudly serving and comforting others as an owner and operator of Hansen Mortuary in Rupert, Idaho. Arvin’s greatest possessions are his five sons and their families. They worked, played, and attended church at his side. All five sons graduated from college and served missions followed by their parents who labored in Portugal. He served in many church leadership positions in the Rupert, Idaho area and as a district president in Portugal. Wherever he served, he loved the people and they loved him. His friendships knew no political, religious, or racial boundaries. 1975 was a big year when the Hansen’s were able to buy their first mortuary in Rupert, Idaho. The upper floors became their home where three more boys joined the family. Due to harsh Idaho winters, Arvin and Sherrill moved to St. George, Utah. He found shortly after retiring that he missed what he loved doing most, comforting and serving others, and with Sherrill by his side re-entered the funeral business in St. George, Utah as one of the proud owners of Serenity Funeral Home. Later this ownership expanded to include locations in Draper, Lindon, and Cache Valley Funeral Home and Cremation Center in Logan, Utah. He made many new friends as well as reconnecting with high school acquaintances. Survived by: his wife, Sherrill, Sons, Larry (Sheri) St. George, Utah, Lynn (Kris) Declo, Idaho, Lyle (Kelee) Boise, Idaho, Lane (Becca) Taylorsville, Utah, Lance (Kim) Pocatello, Idaho, 21 grandchildren, 1 grandson in law, sister Jo Ann Jenkins (Glen) Roy, Utah, and 2 nephews that lived with his family, Bob Atwood (Gladys Ann) Logan, Utah, Tom Atwood (Judy) Mt. Vernon, Washington. Preceded in death by his mother, Eliza Ann Godfrey, his father, Joseph Heber, sisters Aileen Blaisdell and Lora Larsen, brothers Nile Joseph, and Delwyn G. Viewing one will be held 3:00 p.m. to 5:00 p.m. Saturday, August 26, 2017 at Serenity Funeral Home of Southern Utah 1316 S 400 E. St. George, Utah Viewing two will be held 11:00 a.m. to 12 noon Sunday, August 27, 2017 at Serenity Funeral Home 12278 S. Lone Peak Pkwy Suite 103 Draper, Utah A viewing for family and friends will be held from 6:00 p.m. to 8:00 p.m. Monday, August 28, 2017 at Hansen Mortuary 710 6th Street Rupert, Idaho 83350 and from 9:30 a.m. to 10:30 a.m. at the church on Tuesday. Funeral services will be held 11:00 a.m. Tuesday, August 29, 2017 at the Rupert LDS 1st ward 806 E Street Rupert, Idaho. Burial will follow at the Rupert Cemetery. Services are under the direction of Serenity Funeral Home of Utah and Hansen Mortuary.

Arvin Lee Hansen passed away and returned to his eternal family on Wednesday, August 23, 2017. He was in the company of his beloved family at his home in St. George, Utah. Arvin was born on the kitchen table at the family home in Dayton,... View Obituary & Service Information

The family of Arvin Lee Hansen created this Life Tributes page to make it easy to share your memories.

Arvin Lee Hansen passed away and returned to his eternal family...