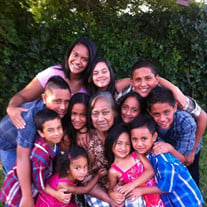 Our beloved Mother, Grandmother, Sister, Aunty, Friend and Matriarch of our family; Atile’ouma Ikakoula Bloomfield passed thru the veil into the waiting arms of Our Father in Heaven, her parents and her loving husband Vilaketi, surrounded by her Children and Grandchildren on March 16, 2015. Our Mother was born on April 18, 1944 to Taniela Fauniteni and Seini Sipaika Veni Ikakoula of Hala'ufuli, Vava’u. Mom, was the only girl in their family, so she was a Princess to her brothers Siosi Holani, Siaosi Latu, Tevita Fauniteni Tuakalau, Fehoko Manavahe, and Fauniteni Pauni Ikalkoula. Mom, attended Tonga High School at the tender age of 11 years old. She was one of 2 girls who tested and passed the entrance exam on the entire island of Vava’u to attend this prestigious school on the main island of Tonga from 1956-1959. She continued to Liahona High School from 1959-1962 where she graduated and moved onto The Church College of Hawaii (CCH) from 1962-1965 where she then met her Sweetheart Vilaketi Bloomfield. They were married September 25, 1966 in Honolulu, Hawaii and later sealed the deal in the Los Angeles Temple making it for all time and eternity. Together they had 8 beautiful children. We lived in Rancho Cucamonga, California, then moved to Nampa, Idaho for over 11 years where she made numerous friends that have traveled to see her in her final days, we then moved to Salt Lake City, Utah and she then moved to Victorvile, California before she came back home to Salt Lake City, Utah where here final resting place would be. Mom, was a great baker! She was well known for her baking goodies! She loved to cook, crotchet, and garden in her spare time, but loved watching her grandchildren play sports most of all. When she wasn’t near her grandkids, she would FaceTime with them. Mom was all about family. Most of all, she was a very humble woman who opened her home to anyone and everyone whom she met. During her final days on this earth, she was visited by people near and far, from all paths of life. She was serenaded by family members, singing her favorite Tongan and church songs. They reminisced about the good ole times growing up in Vava’u, going to college in Hawaii, and so forth… She lived her life to the fullest, til she took her last breath surrounded by her Gems. Her Children and Grandchildren. Our Matriarch is survived by her children: ‘Esita ‘Eta, Nina Roselani (Erwin Sr.) Avendano, Ketrisha Seini, Makeleta Masiva’ilo, Heneli Vuni (Summer), David Gabriel (Nancy), ‘Atile’ouma Katrina & Gabriel Henry Bloomfield. Her Pride and Joys: Roselani, Heneli Jr, Erwin Jr, ‘Esita, Damaris, Ketrisha, Vuni, Senoiileouma, Vilaketi Jr, Nina, Gabriel Jr, Magoo Goo, Atile’ouma III, her brothers and their wives , many nieces, and nephews around the globe, and friends and family across the ocean and state borders. Preceeded in death by her husband Vilaketi, her parents Taniela mo Seini, and brother Fauniteni Jr. ~Toka a he nonga moe fiemalie ki he mau Fa’e ‘ofeina ko Atile’ouma Ikakoula Bloomfield... ‘Apo: Friday March 27, 2015 at the LDS Church located at 5180 West 4700 South, West Valley City, UT from 6:00pm to 10:00 pm. Malanga: Saturday March 28, 2015 at the Tongan South Stake Center located at 5015 West 4660 South, Kearns, UT family 7:00 am to 11:00 am, Bishops program will be from 12:00 pm to 2:00 pm. Tanu 'i: Redwood Memorial Estate located at 6800 South Redwood Road, Salt Lake City, UT next to her Sweetheart. Fakamalo kihe ngaahi famili moe kaungame’a, moe Tonga kotoa ‘ihe ngaahi mata’ofa moe fie kaunga mamahi kuo mou vahevahe mai kiate kimautolu lolotonga ‘ae taimi ‘oe mamahi. ‘Oku hoko ia koha fakafiemalie kiate kimautolu ‘ihe taimi ‘oe mavae. Tu’a’ofa atu mei he fanau a Vilaketi mo Atile'ouma Bloomfield.. Services are under the direction of Peni Malohifo'ou of Serenity Funeral Home

Our beloved Mother, Grandmother, Sister, Aunty, Friend and Matriarch of our family; Atile&#8217;ouma Ikakoula Bloomfield passed thru the veil into the waiting arms of Our Father in Heaven, her parents and her loving husband Vilaketi, surrounded... View Obituary & Service Information

The family of Atile'ouma Ikakoula Bloomfield created this Life Tributes page to make it easy to share your memories.