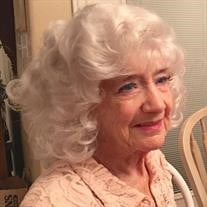 Santa Clara, UT - Audrey Oleana Morris Kroll slipped quietly from this earthly world at 1:00 a.m. March 17, 2016, as she slept in her home on Victors Street, Santa Clara. Born in Beaver, UT, Jan. 14, 1925; Audrey was raised primarily in the St. George, Santa Clara area. She married Stanley J. Ranquist in Jan. 1947, separated in 1965, divorced shortly thereafter. Audrey married the love of her life, A. James Kroll, Dec. 16, 1967, and was sealed to him for time and all eternity the same date in 1998, in the St. George Temple. Audrey lived a life of successes; building and growing, one upon another; with her own beauty salon, then a major retailer for wigs. Later she was consistently a member of the Million Dollar Club for Wasatch Front Realtors, and later one of the area’s top Commercial Real Estate Agents, and of most importance to her; a wonderful mother to her two daughters. Audrey is survived by: her younger daughter, Renee and her stepchildren and grandchildren, Leslie and her son Christian, Ben and his sons Shane and Keaton, her grandsons by her older daughter; William Dean, Christopher, and John Welder; her stepsons J. Denis Droll and Gary Kroll; her stepdaughter Judy Kroll Giles; and a loving bundle of grandchildren. She is preceded in death by: her beloved Jim, whom she now rejoins; her beloved “Sis;” VellaRuth Morris Hafen; her two brothers William LaGene, and Earl J., Morris; her Father and Mother, William T Morris and Ruby Ellen McAdams; and her precious older daughter D’Onne Welder. A viewing and informal gathering to celebrate Audrey’s beautifully full life will be held at the Santa Clara First Ward LDS Chapel Wed., March 23, 2016, at noon in the Relief Society room. Another service will be held Thursday March 24, 2016, at 12 noon at Serenity Funeral Home in Draper, UT 12278 S Lone Peak Pkwy. A short graveside service will be held immediately thereafter at Larkin Memorial Gardens where she will be laid to rest next to her beloved “AJ.” Audrey’s immediate, nuclear family wishes to extend very special thanks to their large extended family without whom, her final months would have been far more difficult, the Hospice agency who attended to her medical needs; particularly Dr. Joseph Woolley, who understood her wishes so thoroughly and the nurse she was fortunate enough to have attend to her so personally and lovingly, Michelle Johnson RN, and so many others the newspaper would be filled with nothing but names of the loving and kind people in her life.

The family of Audrey Oleana Kroll created this Life Tributes page to make it easy to share your memories.