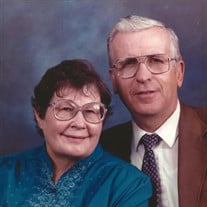 Barbara Nelsa Neilson Bybee passed away peacefully on March 23, 2020, just after her 92nd birthday. She is now reunited with her beloved husband, Sirren Bybee. Barbara was in memory care in Salt Lake City when she died, under the kind and watchful care of the staff at Capitol Hill Senior Living. Barbara was born March 12, 1928, in Salt Lake City, to Mary Riding and Ray Neilson. The oldest of four children, she was joined by brothers Raymond and Dick and sister Charla. She grew up in Salt Lake City and graduated from South High School in 1945. Barbara was baptized into The Church of Jesus Christ of Latter-day Saints. Throughout her life, she faithfully served in many capacities and was a great example of faith and devotion. For several years following high school, Barbara moved back and forth between Salt Lake City and Los Angeles, where her family had relocated. She also enjoyed two summers working at Yellowstone National Park. During that time, Barbara met Sirren Florenz Bybee, from Soda Springs, Idaho. After 3 ½ years of courtship by mail (Sirren spent two years on a mission and another 18 months serving in the Army), they married on June 17, 1955, in the Logan Utah temple. Through the following decades, Barbara and Sirren welcomed seven children: Kathleen (David Hitchcock), Leroy (Cheryl), Darrell (Ginnie), Merla (Nancy), Verle (Lori), Lorraine (Mark Greenhalgh) (former husband Mark Babcock), and Eugene (Carla). They began their family in Logan while Sirren was a student, then lived in Woods Cross; Salt Lake City; Blackfoot, Idaho; Soda Springs, Idaho; and for many years in Bennion (now part of Taylorsville), Utah, where they grew deep roots. These family years were highlighted by camping trips throughout the mountain west. Barbara loved southern Utah, Yellowstone, and her favorite place, Cottonwood Lake, a small, chilly mountain lake in southwestern Wyoming. There she would take her canoe out onto the beautiful green-blue waters, all alone, sun dancing on the glistening water, and there she found much joy and peace from the anxieties of life. Their family trips often included family friends, as well as friends of her children. Everyone was welcome with Barbara and Sirren. As their children moved on, Barbara and Sirren drove a number of times across the country to visit them. Besides the uncounted hours of devotion to her family, Barbara was called to extract names for the Church genealogy department and spent years deciphering from microfiche hundreds of thousands of names from Denmark, old England, and other countries. She also received a commendation from the State of Utah for more than 15 years of weekly volunteer work reading for the blind through the Utah Radio Reading Service. In addition, Barbara was involved with the Daughters of the Utah Pioneers and loved her associations there. To the very end of her life, Barbara was an avid reader and loved music. She and Sirren spent many wonderful years singing together in the West Valley Chorale. Barbara said that "heaven had better have music or it won’t be heaven!" Country music was her favorite, but she also loved Mexican music (a highlight of her later years was a trip to Las Vegas to see her favorite singer). Barbara is survived by six of her seven children (Darrell preceded Barbara in death), her brother Dick, 20 grandchildren, and 11 great grandchildren, as well as numerous in-laws, nieces, and nephews. Barbara loved her family and extended family dearly and with her whole heart. We miss her but know she is reunited with many of her loved ones once again.

Barbara Nelsa Neilson Bybee passed away peacefully on March 23, 2020, just after her 92nd birthday. She is now reunited with her beloved husband, Sirren Bybee. Barbara was in memory care in Salt Lake City when she died, under the kind and... View Obituary & Service Information

The family of Barbara Nelsa Neilson Bybee created this Life Tributes page to make it easy to share your memories.