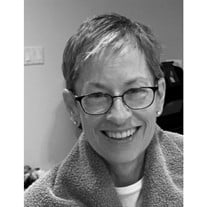 Hello Everyone, We are looking forward to celebrating Barb's life this Saturday, November 5 at The Tower of Rice-Eccles Stadium (451 South 1400 East, Salt Lake City UT 84112). The venue will be ready at about 5:30 pm to start welcoming guests. We anticipate that the formal service will start at about 6 or 6:15. There is a large parking lot on the west side of the stadium (marked A and U stalls); there will be no charge to park on Saturday. Please use the "Gate C" entrance to access the south elevator to the 4th floor of the Tower; the event will be held in the Scholarship Room. Thank you for all your love and support, Derek Obituary Barbara Allison Chatfield, 57, passed away on Saturday October 8, 2016 in Salt Lake City, Utah. She was born August 25, 1959 in Neuilly-sur-Seine, France to Stanley and Margery Chatfield. She married Derek Uchida on October 21, 1989. Barb grew up in Monument, Colorado and attended Lewis Palmer High School, where she was captain of her basketball team and Valedictorian. She matriculated at the University of Colorado, Boulder, and became a proud sister of the Chi Omega fraternity and a member of Phi Beta Kappa. She graduated with a Bachelor of Arts degree with Distinction in Molecular, Cellular, and Developmental Biology in 1981. Barb attended medical school at Virginia Commonwealth University, then received training in Pediatrics and Pediatric Pulmonology at the University of Colorado Health Sciences Center. In 1991, Barb entered active duty in the United States Air Force, and served as the medical director of Pediatric Pulmonology and Critical Care Medicine at Keesler Air Force Base in Biloxi, Mississippi. After achieving the rank of Major and honorably fulfilling her service to the Air Force, she accepted a faculty position at the Department of Pediatrics, University of Utah School of Medicine. The passion of Barb’s medical career was to care for children affected by cystic fibrosis (CF) and to become a leader in the fight against CF through research and investigation. She became the Pediatric Center Director of the Intermountain CF Center in 2000, and was promoted to the rank of Professor of Pediatrics in 2008. Under Barb’s leadership, the Center became nationally recognized for excellent pulmonary function outcomes and quality improvement projects. She was a principal investigator on numerous grants, was an author on many academic publications, and played a major role in the institution of newborn screening for CF in Utah. Most importantly, Barb cherished the bonds she developed with the children and families affected by CF. Despite Barb’s many academic and professional accomplishments, above all else, she will be remembered for her genuine kindness and unwavering selflessness. She was a devoted mother to her three daughters, Kimberly, Allison, and Emily, and a loving wife to her husband, Derek. She was a great friend to many. Barb had so much compassion for those who were a part of her world, and had a unique ability to see the good in everybody. She dedicated all aspects of her life to helping others and making a difference, and she certainly succeeded. She is loved by many and will never be forgotten. Barb is survived by her husband, Derek; daughters, Kimberly, Allison, and Emily; mother, Margery Chatfield; sisters, Chris McCloy (Dave), Catherine Dmochowski (Mark); brothers, Steve Chatfield (Kali), Keith Chatfield (Joan). She was preceded in death by father, Stanley Chatfield; brother, Jeff Chatfield. We would like to thank Barb’s medical team at the Huntsman Cancer Institute Breast Cancer Program, headed by Dr. Saundra Buys, for your incredible care, compassion, and support. We would like to also thank the University of Utah Department of Pediatrics; it was an honor for Barb to have been part of the faculty family for over 20 years. In lieu of flowers and gifts, donations to the Utah Chapter of the Cystic Fibrosis Foundation or the Huntsman Cancer Institute Womens Cancers Disease Oriented Research Teams (WDOT) would be appreciated. A memorial service celebrating Barb’s life will be held Saturday November 5, 2016 at 5:30 pm in the Scholarship Room on the 4th floor of The Tower at Rice-Eccles Stadium, 451 South 1400 East, Salt Lake City, UT 84112.

Hello Everyone, We are looking forward to celebrating Barb's life this Saturday, November 5 at The Tower of Rice-Eccles Stadium (451 South 1400 East, Salt Lake City UT 84112). The venue will be ready at about 5:30 pm to start welcoming guests.... View Obituary & Service Information

The family of Barbara Allison Chatfield created this Life Tributes page to make it easy to share your memories.

We are looking forward to celebrating Barb&#39;s...