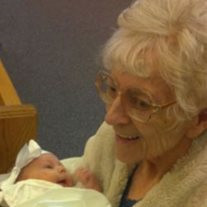 Barbara I Wells Cox, daughter of Walter S. and Ingeborg Schumann Wells, left this world on Valentine’s Day, February 14th, 2014, to join her eternal sweetheart, Azile G Cox. Born in Brooklyn, NY on August 26, 1934, Barbara married Azile on April 26, 1951 in Evanston, Wyoming. They enjoyed 61 wonderful years together. Barbara attended Granite High School in Salt Lake City and Laramie County Community College in Cheyenne, WY. Although her talent for accounting helped her support her family throughout the early years of her marriage, her passion for the arts and music provided the background for which her numerous talents and abilities thrived. As a child she learned to play the violin at her grandfather Arthur Schumann’s knee. Later she enjoyed performing in high school musicals and as part of a vocal trio, The Trippletones. However, she is best known for her writing skills and her artistic ability. Her oil paintings grace the walls of many loved ones’ homes. Fulfilling her final wish to further scientific and medical research, Barbara donated her body to the University of Utah Body Donor Program. A memorial and luncheon in her honor will be held on Saturday, April 12, 2014 from 11 a.m. until 1:30 p.m. in the Draper 3rd Ward Building at 13085 South 300 East, Draper, UT. In lieu of flowers, donations to the U of U Body Donor Program in Barbara’s Honor are appreciated. In addition, she and other program donors will be remembered during the Program’s annual memorial service at 11 a.m. on Friday, May 23, 2014 at the Program's Memorial Grave Site in the Salt Lake City Cemetery. Preceded in death by her husband, Azile, and her parents, she is survived by her sister, Dorothy Hanson, her children, Richard (Rick) and Vicki Cox, Christine (Tina) and James (Jim) Lutterman, Elizabeth (Betty) and Clay Meier, and Rebecca Armstrong, 18 grandchildren, 46 great-grandchildren, 2 great great-grandchildren, and numerous nieces and nephews.

The family of Barbara I Wells Cox created this Life Tributes page to make it easy to share your memories.