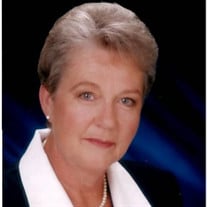 Our beloved mother, grandmother, and friend, Barbara Ann Boyce Fitzgerald, died on June 21, 2022 in Provo, Utah of natural causes surrounded by her family. Barbara was born on June 4, 1936 in Provo, Utah to George L. Boyce and Katherine Sumner Boyce. She is survived by all five of her children: Tami Harris (married to Randy J. Harris), Boyce Fitzgerald (married to Sandra Hasler Fitzgerald), Jan Fitzgerald, Kurt T. Fitzgerald (married to Kirsten Fitzgerald), Aimee Gantt (married to Vernon Gantt) as well as 24 grandchildren and 33 great grandchildren. She is also survived by her siblings James S. Boyce and Patricia K. Hollingsworth. Barbara married Crozier Kimball Fitzgerald on June 6, 1957 in the Salt Lake Temple. She supported father’s military career by raising us children while making a home wherever dad was stationed. In father’s 20+ year military career as a chaplain in the United States Air Force, Barbara moved the family every few years to various military bases around the world. As a family, we experienced world-wide adventures and witnessed history firsthand as we experienced diverse cultures together. Barbara gave the seminary graduation speech for her class even though she was not yet a baptized member of the Church of Jesus Christ of Latter-day Saints. She was baptized later that year. Barbara served the Church in many leadership and service positions including as a missionary in the Tucson, Arizona Mission. Mother’s faith and testimony in the Lord Jesus Christ was the foundation of all she did. In the 1980s, Barbara was a secretary to Levell Edwards during his “golden years” and was a supporting staff member of the 1984 National Championship team. Following father’s death, Barbara married Edward Terris. They enjoyed five years together before Edward died in 1995. Mother enjoyed being in the company of her children and grandchildren and was a spiritual example to them. They were her greatest joy. Funeral services will be held Tuesday, June 28, 2022 at the Lakeside 7th Ward Chapel located at 2225 West 620 North, Provo, Utah at 2:00pm.

The family of Barbara Ann Boyce Fitzgerald created this Life Tributes page to make it easy to share your memories.