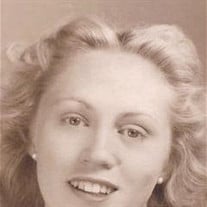 Barbara Branch Lines, 90, passed away peacefully in Orem, Utah on April 25, 2016. Born April 24, 1926 in Wellington, Utah, she was the youngest of three children born to Ray and Sylvia Shimmin Branch. She married Leon Lester Lines in Price, Utah on September 7, 1948. They later divorced. She is the mother of four children: Cindi (Robert) Witt, Lori (David) Orton, Leo L. (Jeanne) Lines and L. Ray (Sharon) Lines. She was preceded in death by her parents, her siblings (Evelyn Branch Snow and Fay Lamond Branch), grandson Justin Robert Witt and great-granddaughter Hannah Emily Anderson. She is survived by 4 children, 19 grandchildren, and 25 great-grandchildren. Raised in Price, Utah, she graduated from Carbon High School and later attended the LDS Business College before being hired by the Bell Telephone Company. Her husband's education and employment took the family to Salt Lake City, New Jersey, Maine, Washington State and Alaska, until she permanently settled in Provo, Utah in 1972. She worked in the Placement Center and then the Development Office at BYU until her retirement, and later served two full-time missions for The Church of Jesus Christ of Latter-day Saints at the New Zealand and Washington D.C. temples. She loved and served her family and her church, where she held many callings. She was a passionate BYU sports fan, and regularly attended football and basketball games. She was a fun, energetic person who laughed often and was loved by all around her. Funeral services will be held Friday, May 6, 2016 at 11:00 A.M. in the Lakeview Chapel, 400 West 1800 South, in Orem. Friends may meet with the family that morning at the church between 9:30–10:45 A.M. Burial will be at the Price City Cemetery in Price, Utah. In lieu of flowers, donations can be made in her memory through www.ldsphilanthropies.org.

The family of Barbara Branch Lines created this Life Tributes page to make it easy to share your memories.