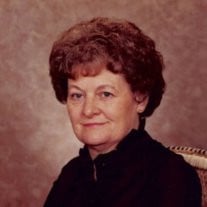 Barbara Pedersen Orton passed away peacefully at her home on January 3, 2014. Her caring nature and fun-loving spirit will be missed by family, friends and associates. Barbara was born in Salt Lake City, Utah on February 4, 1926 to Edward Franklin Pedersen and Eva Beatrice Lloyd. Her siblings include: Edward F. Jr. (deceased), Lola (Barton/Ransom) (deceased), Ronald, Janet Crouch and Gary. They grew up in Bountiful, tending their large orchard and working in the family business; State Hardware, which later became Pedersen’s. Barbara was preceded in death by her husband and sweetheart, Ralph Lowell Orton. They were married in the Salt Lake Temple on November 12, 1948 and spent the next 61 years together in Twin Falls, Idaho, Bountiful and Midvale, Utah. They had six sons: Kimball (Linda), Kevin, Randy (Sherri), Don (Shawn), Dale, and Alan (Kelli), 15 grandchildren and 12 great grandchildren. Barbara graduated from Davis High School in 1944, subsequently receiving a degree in social work from the University of Utah. in 1949, she and Ralph moved to to Twin Falls, Idaho where the business was expanding, spending 16 years there. They left Twin Falls to return to Utah to manage the Salt Lake City store. After retiring in 1985, Ralph and Barbara served an LDS mission in Independence, Missouri. She loved that experience, both for the chance to share her cherished faith and for the many long lasting friendships it created. Barbara was a lifelong member of the LDS church and served in many callings therein. She will be remembered for her love of music, which she shared with all throughout her life. Funeral services will be held on Saturday, January 11, 2014 at the LDS chapel at 6710 South 1300 East in Cottonwood Heights. The viewing will be from 12:30 - 1:45 p.m., with the funeral starting at 2:00 p.m. Interment will be at the Bountiful City Cemetery.

Barbara Pedersen Orton passed away peacefully at her home on January 3, 2014. Her caring nature and fun-loving spirit will be missed by family, friends and associates. Barbara was born in Salt Lake City, Utah on February 4, 1926 to Edward... View Obituary & Service Information

The family of Barbara Pedersen Orton created this Life Tributes page to make it easy to share your memories.

Barbara Pedersen Orton passed away peacefully at her home on...