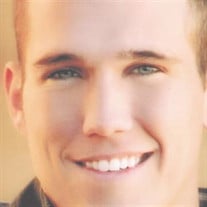 April 6, 1987 ~ June 25, 2015 Benjamin Chad Carson, 28, passed away on June 25, 2015 in Salt Lake City as a result of a tragic motorcycle accident. He was born April 6, 1987 in Columbia, Missouri to Gary Chad and Lynnelle (Grant) Carson. Benjamin attended schools in Ogden and recently was a student at Salt Lake Community College. He was so close to completion and looking forward to starting his professional career. He loved anything fast, was terrified of heights, and he loved to celebrate life. Ben had a "drunken" laugh that made you laugh with him and a presence that made you feel at ease. Benjamin we miss you SO much!! He is survived by his parents, Chad and Lynnelle; sisters, Chelsea Carson (Dustin Obermiller), Kenzie Carson, Kaitlyn (Zachary) Peterson, and Sydney Carson; brother, Michael Carson; grandparents, Gary and LouAnn Carson, and Ruth Grant; many aunts, uncles and cousins. He is preceded in death by his grandfather, Leland Grant. Memorial services will be held at the LDS Church Building at 1401 Country Hills Drive in Ogden at 11 a.m. Thursday, July 2, 2015. A viewing will be held Wednesday, July 1, 2015 at the LDS Church Building at 1401 Country Hills Drive from 6 to 8 p.m. and Thursday at the church prior to services from 9:30 to 10:40 a.m. Interment, Leavitt's Aultorest Memorial Park. Thank you to family and friends that shared their love with our son and brother.

The family of Benjamin Chad Carson created this Life Tributes page to make it easy to share your memories.