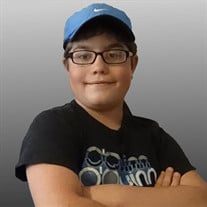 Benjamin Troy Heber returned to the open arms of Heavenly Father on October 8th, 2019. He will forevermore be in the hearts of those who knew him. On May 4th, 2006 Benjamin was born in the LDS hospital, Salt Lake City, Utah to his loving family. He was thirteen-years-old upon his untimely death due to a car accident. Benjamin loved art, computer and video games, and writing. He was a ball of energy that radiated fun and joy. Amongst his many talents, Benjamin was an innovative cook, compassionate son, loving brother, talented writer, and animal enthusiast. Benjamin was a spiritual boy with a strong testimony of his Savior. He loved hymns and learning gospel truths. Benjamin was baptized into the Church of Jesus Christ of Latter Day Saints on the 1st of November, 2014. His favorite scripture was Mathew 19:14 “But Jesus said, Suffer little children, and forbid them not, to come unto me: for of such is the kingdom of heaven.” His favorite Hymns were “Mary’s Lullaby”, “Love one Another”, and “A child’s Prayer”. Like most boys, Benjamin loved exploring the wild and going on adventures. His powerful imagination fueled his energy and often added to the excitement of those around him. He was a talented Boy Scout who excelled in developing his skills. His intellect showed through whenever he spoke of his passions, which was namely being around his family. Benjamin was a funny boy who loved to laugh and to make others laugh. His humor was infectious and could send entire groups into fits of mirth. One of his goals in life was to become a therapist, to help those with learning disabilities, depression, and autism. He was compassionate and understanding toward those who struggled. Now he can fulfill that dream from the other side, working side-by-side with his Heavenly Father. Benjamin was attending Draper Park Middle School and was in the 8th grade. His teachers always praised him for his kindness and will to help everyone. One of his class periods was of tutoring other younger kids with special needs. Benjamin is survived by his father Galen Heber, his mother Claudia Bianca Da Rocha, and his two brothers, Noah and Rafael. Benjamin’s viewing will be held on October 12th, from 9:00 AM to 11:00 AM at The Church of Jesus Christ of Latter-day Saints building located at, at 12987 S. 300 E., Draper, Utah. Funeral services will follow after at 11 AM to 12 PM. Graveside services will take place directly afterwards at Holiday Memorial Park, 4900 Memory Lane, Holladay, Utah. There is an "Ever Loved" account set up for Ben and his family at https://everloved.com/life-of/benjamin-heber/?flow=201

Benjamin Troy Heber returned to the open arms of Heavenly Father on October 8th, 2019. He will forevermore be in the hearts of those who knew him. On May 4th, 2006 Benjamin was born in the LDS hospital, Salt Lake City, Utah to his loving family.... View Obituary & Service Information

The family of Benjamin Troy Heber created this Life Tributes page to make it easy to share your memories.