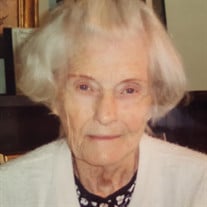 Betty Cahoon was born in Logan, Utah on December 10, 1917 to Charles Leech Richards and Susan Maude Matheson Richards. She died April 9, 2016 at the age of 98. She is preceded in death by her husband James Wayne Cahoon, her father, mother, and six siblings: Veda Reed, Charles Matheson Richards, Keith Richards, Claude Richards, Helen Paxton, and Beth Farr. She is survived by Thelma Sue Jensen Frazier her youngest sister, of California. She is also survived by her three children: Nancy Patricia Sampson, Richard Wayne Cahoon and Kathy Meredith. She has 11 grandchildren, and 24 great grandchildren. The fifth of eight children, she was mainly raised in Salt Lake City where she attended Roosevelt Jr. High School and East High School. After her marriage, Betty first lived in Salt Lake, followed by Cedar City for a few months, and then St. George for about 5 years. After returning to Salt Lake, she spent the rest of her married life within a 5 block radius of where she was raised. Her children also attended Roosevelt Jr. High and East High. She was always there for her children, who never needed a key to get in the house. The older two graduated from the University of Utah and the youngest from BYU. She was a good dancer and taught dancing at the church. She was always proud of the fact that she taught her older brothers how to dance. She loved to chat and made friends with all kinds of people. She supported the Deseret Industries with donations and purchases and has been known to take people home to give them some of her furniture when she learned what they were looking for at the DI. She was very creative in her sewing and repurposing of all kinds of things from the DI. She taught herself to play chord accompaniment on the piano and treated herself by playing in her spare time. She also enjoyed reading recipe books and her family were the lucky recipients of her baking and cooking efforts. Much later in life she took up oil and watercolor painting and has blessed many lives with her art. She was always a lady and a pleasure to know. Her gentle, cheerful presence will be missed.

Betty Cahoon was born in Logan, Utah on December 10, 1917 to Charles Leech Richards and Susan Maude Matheson Richards. She died April 9, 2016 at the age of 98. She is preceded in death by her husband James Wayne Cahoon, her father, mother,... View Obituary & Service Information

The family of Betty Richards Cahoon created this Life Tributes page to make it easy to share your memories.