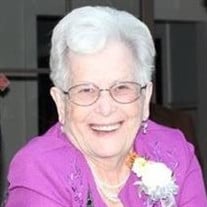 Betty Jo Watson Wade, Wife, Mother, Grandmother, Sister, and lover of a good tomato sandwich. Betty left her earthly home on March 23rd, 2017. Born August 19, 1929, she was 87 years of age. Our social norms usually dictate that one’s obituary simply state the needed facts, arrival, stuff in between and departure. Yet it seems somehow wrong to leave out the best parts of this strong woman’s story. So, we won’t. Betty made her appearance as the youngest daughter and second youngest of 9 children. She was born and raised in the small southern town of Quitman, Georgia. Betty was beautiful, athletic, stubborn, one amazing cook and all about family. She attended Quitman High School where she ran track, played softball and was the captain of her basketball team. These skills came in handy when years later she coached her daughters on church leagues. Never without her sister Billie, the two captured the attention of 2 young Air Force Airmen who just happened to be best friends. So, best friends married sisters and a life journey began. Darrell and Betty married on September 1, 1951 in Quitman, GA. On October 10, 1956 Betty and Darrell were sealed to each other for Time and all Eternity in the Los Angeles, California temple of the Church of Jesus Christ of Latter-Day Saints. Betty faithfully supported and followed her husband from Alaska to Florida and to numerous states in between. Blessed with 7 children they lived in military communities throughout the US and created many friendships and memories. When children were raised and retirement came into play they moved to Dunnellon, Florida where so many of their grandchildren’s happiest memories were born. Boating the Rainbow River, Flea Market trips, riding the tractor with grandpa and waking up to the most delicious Southern breakfasts around. Be it so noted that no one ever left her table hungry or went home without a plate or two to go. You’ll never find a chicken fried steak that could match what she fried up with such ease, but you won’t be able to duplicate it, even with the step by step recipe given. The secret goes with her! Betty knew and loved her grandchildren, ALL of them. And each and every one of them knew just what to expect with any visit to the river house. They knew too that her rules replaced parental rules upon entry through the porch door. You could eat, or not eat, but either way a stash of candy awaited you and if she didn’t have just what you liked, then a trip into town was taken! Betty loved the road and often for no other reason than she didn’t want to sit around anymore, the car would be loaded for a trip to see the kids. All space would be filled with boxes of oranges, peaches, flats of strawberries, or a case or two of freshly canned greens, all delivered with the satisfaction that she was filling her children’s pantries. No child or grandchild was ever left out or forgotten, birthday cards and Christmas gifts always arrived on time. Weddings were never missed and food laden tables never ceased to impress. She could take the simplest ingredients and turn them into the finest feast ever served. She came from a simple place, a barefoot southern childhood, where family was family no matter what. Because of that childhood, Betty valued her family more than anything else. A servant also to the Lord she held callings as a teacher, chorister, and choir director. Both Betty and Darrell served faithfully together in the Orlando Temple. We will remember her magic in the kitchen where all that was required to make it better was butter…. or bacon! Crossword puzzles and sharpened pencils that lay on tables throughout the house and every known volume in existence of the Readers Digest Condensed Books. We will remember her stubborn ways, the silent unspoken rules that were just because and learning NEVER to mention the name General Sherman in her presence! But most of all the world is a better place because of what she gave it. Thank you, dear lady, for making our lives so interesting, aggravating, delightful and plain old fun. Through you we have learned that judgements are not ours to deliver but rather to love unconditionally. Our mother leaves behind her husband of 66 years, Darrell Eugene Wade, 1 sister, Mearle Maxine “Billie” Kowalczik of Homosassa, FL., 7 children, Michael (Debra) Wade of Grayson, GA. Cynthia (Ken) Hoagland of Draper, Utah, Bettina (Pat) Kitchen of Humble,TX, Rebecca (David) Eyerly of Arlington, TX, Steven (Karen) Wade of Atlanta. GA. Daniel (Jeniel) Wade of Tampa, Florida, Lorinda (Richard) Snow of Midland, TX, 36 grandchildren, 92 great grandchildren with 6 soon to be arriving from the heavens above and 1 great great granddaughter. A "viewing/open house" will be held from 10:00 to 11:30 am on Saturday April 1, 2017 at the Serenity Funeral Home at 12278 So. Lone Peak Pkwy, Suite 103 - Draper, Utah 84020, then, Betty will be brought home to Quitman, GA. for a graveside service on April 15th, 2017. Here she will rest until the 2nd coming of our Savior and the promised resurrection.

The family of Betty Jo Watson Wade created this Life Tributes page to make it easy to share your memories.