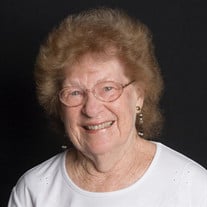 Beulah Ruth Tice Umholtz Kennie passed away on June 18, 2018. She reached her 99th Birthday and then decided it was time to join her loved ones on the other side. Mom was born on Valentine’s Day, February 14, 1919, at Chamberhill, Pennsylvania just a few miles from Harrisburg. She was the 4th child of thirteen children born to Landis Edwin Tice and Emma Grace Doutrich. Her brother, Herb Tice, living in Pennsylvania, is her only surviving sibling. She often talked about growing up on the chicken farm with many fond memories of her parents and siblings. Our favorite vacations were trips to the Tice Reunions in Pennsylvania. Beulah graduated from Hershey High School and worked in the Hershey Chocolate Factory feeding candy bars into a machine for wrapping. She met Raymond Grady Umholtz at a high school reunion dance. They were engaged 5 months later and then married on Valentine’s Day February 14, 1939 in Hershey, Pennsylvania. Two daughters were brought into the marriage, Bonnie Carole and Beverly Jean. Dad and Mom celebrated their 50th Anniversary in San Diego where they had made their home since 1949. They both worked at Convair and General Dynamics. Beulah’s career lasted from 1949 to 1964 and she remained in contact with many coworkers through retirement years. They were married for 55 happy years until Ray passed away from Pancreatic Cancer in 1994. She later married an old friend, Fred Kennie, when she was 87. They had a good life for 10 years until he passed away. Beulah’s hobbies were knitting, sewing, gardening and helping anyone that needed help. She loved to bake and pies were her specialty. She adored her ten grandchildren and helped and supported them throughout their lives. Each grandchild really felt they were “her favorite”. Her life was full and happy until she fell and broke her hip at the age of 95. She was a faithful wife, cherished friend, loyal neighbor and wonderful mother, grandmother, great-grandmother and great-great-grandmother. She touched many lives with her kindness. Her children and spouses are Bonnie (Jim) Pollock of Southern Utah, Beverly (Bob) Wadman of Northern Utah. She has 10 grandchildren, 33 great-grandchildren, and 11 great-great- grandchildren. They will all miss her love and example. A private family gathering will be held to celebrate her life. We ask that you keep Beulah in your fondest memories and in your heart,

Beulah Ruth Tice Umholtz Kennie passed away on June 18, 2018. She reached her 99th Birthday and then decided it was time to join her loved ones on the other side. Mom was born on Valentine&#8217;s Day, February 14, 1919, at Chamberhill, Pennsylvania... View Obituary & Service Information

The family of Beulah Ruth Tice Umholtz Kennie created this Life Tributes page to make it easy to share your memories.