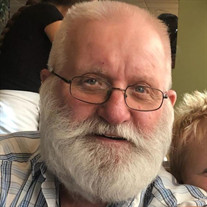 Boyd Larsen Evans, father, grandfather and friend, passed away on April 16, 2021. Boyd was born on January 18, 1943 to Elvis and June Evans, who raised him in Granite, Utah. He was the oldest son in what would become a very large family. When he was young, he enjoyed causing mischief, even getting kicked off of his own dad’s school bus. As he grew up, he was loved and respected by his siblings and friends. He graduated from Jordan High School in 1961 and was proud to be a Beetdigger. Later, he enjoyed being involved in his alumni association. In 1965, he joined the United States Navy and he proudly served on the USS Kittyhawk during the Vietnam War. He was trained in electronics and worked on radars, radios and such on the ship. Later, in an effort to promote, he became a Mineman. He spent a total of twenty years in the Navy and Naval Reserves, retiring as a Petty Officer First Class Mineman. On July 7, 1967, Boyd married Vickie Tanner and they were together for 25 years. During their marriage, they had four sons. After their divorce, Boyd and Vickie remained friends and Vickie’s family loved him. During his life, Boyd worked hard to provide for his family. He dabbled in sales, worked on traffic signals, took mechanic classes, and worked at Hill Air Force Base. Eventually, he was tired of working two jobs and became a long haul truck driver. He enjoyed driving truck and drove for many years. He loved to tell stories about things he see on his routes. Boyd loved spending time with his family and friends. He loved his parents and all of the times they brought family together at “Evans Heaven.” He enjoyed camping and fishing, particularly at Joe’s Valley and Granite Flats. He enjoyed the annual family hunting trip to Meadow. He was an avid bowler for many years, where he met many friends and made fond memories. Boyd had a big heart. He was full of sarcasm and teasing. He was very proud of his sons and his grandchildren. He truly loved them all. He will be dearly missed by all who knew him. We’d like to give special thanks to his friend and care-taker, Laura Solis, who provided companionship and helped him get around these past few years. Boyd was preceded in death by his parents; Elivis and June Evans. Boyd was survived by many siblings, his children: Nate (Kasidy), Chris (Tina), Matt and Patrick, his grandchildren and a soon to be great grandchild. Funeral Services: A viewing will be held on Saturday, April 24, 2021, from 9:00 AM to 11:00 AM, followed by funeral service at 11:00 AM in the Bell Canyon Ward Meetinghouse, 9575 South 3100 East. Interment at the Granite Cemetery. Friends may attend by Zoom and a link will be posted here the morning of the services. https://us02web.zoom.us/j/84386264009?pwd=UEtHUXVNOVBvSEl1Y1NjdkZ5NytwUT09 Meeting ID: 843 8626 4009 Passcode: 895451 COVID precautions are still in place at the Meetinghouse and we ask masks be worn and social distancing be respected.

Boyd Larsen Evans, father, grandfather and friend, passed away on April 16, 2021. Boyd was born on January 18, 1943 to Elvis and June Evans, who raised him in Granite, Utah. He was the oldest son in what would become a very large family. When... View Obituary & Service Information

The family of Boyd Larsen Evans created this Life Tributes page to make it easy to share your memories.