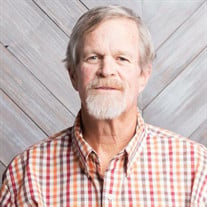 On April 16th, 2018, we are horrendously anguished to report the peaceful passing of our one of a kind husband, father, grandfather, brother, and most potently, a friend to all who knew him. Bradly Thomas Keele was born on February 27th 1961 in Provo, Utah to Joyce and Gary Keele where he subsequently grew up. Being the youngest born to four siblings, Brad was full of wise crack stories about his siblings and always spoke passionately about his parents. He had a sense of humor that not a single person could resist, always full of wit, bad puns, and dad jokes that most people didn't think were funny. Innately capable to make friends easily (with everyone and anyone), he had an infectious charisma that we don't think anyone else in the world could possibly mimic. We think very few were as laid back and genuine as Brad was. After graduating from Orem High School in 1979, he attended college courses at Dixie State University and Utah Valley University before settling on work as a carpenter. While committed to his job, he met the love of his life, Shelly Easton in The Dalles, Oregon -- they married in 1991, and had two daughters whom they raised in Lehi for nineteen years. In 2013 they made an eventual move to Eagle Mountain where Brad spent the last five years of his remaining life. We have no words to describe our loss of the unique and incredible man who endlessly provided for his family. Brad loved rock music, camping, fishing, making an incredible bowl of chili, watching sports, nature, anything remote control that he could get his hands on (particularly helicopters), spending time with his children and grandkids, and all of the many great friends he had made along the way. Brad is survived by his wife, Shelly Easton-Keele; two daughters, Allyson Keele and Alexandra (Kyler) Sandoval; two granddaughters, Ariya and Adalynn Edwards; two brothers, Steve (RoShan) Keele, Ron (Jana) Keele; one sister, Sheree (Dave) Whiteman. He was preceded in death by his mother and father, Joyce and Gary Keele. We don't know what we'll do without him, but we'll have to get a watch to finally know what time it is. Family and friends are welcome to attend a memorial service and luncheon in his honor on April 21st, 2018. Please dress as casually and as comfortably as you'd like since Brad would like it no other way. The gathering will be held at the Lindon Community Center Cultural Arts Room from 1:00pm-3:00pm at 25 N Main Lindon.

On April 16th, 2018, we are horrendously anguished to report the peaceful passing of our one of a kind husband, father, grandfather, brother, and most potently, a friend to all who knew him. Bradly Thomas Keele was born on February 27th 1961... View Obituary & Service Information

The family of Bradly Thomas Keele created this Life Tributes page to make it easy to share your memories.