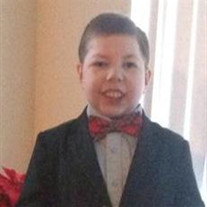 Brandon JARED D’Hulst left this world quietly on January 31, 2015 humbly and beautifully, surrounded by those who loved him. His legacy means far more than any earthly successes could even measure. He was a giant among us. Jared’s accomplishments and triumphs have touched more souls in his short life than most of us could dream of or hope for ourselves. Jared entered life much the same as every new baby, born on July 31, 1993 to a family excited about his arrival. A proud mom and dad touched by his beauty and innocence…three older sisters Emily, Roylin and Naomi and two older brothers Daniel and Ben that couldn’t wait for him to grow and learn and play with them…he was a most special gift. In the spring of 1994 Jared was diagnosed with an inoperable brain tumor, polycystic astrocytoma, which was discovered had been present since his birth. This news brought many emotions for his family and left his mom and dad devastated. The following months and years proved very difficult as Jared underwent several chemotherapy and radiation treatments, in addition to the amounts of tubes and needles and diets and medicines that were used to help in the effort of healing him. Being sick became the only thing he knew. It seems as though he “lived” at the hospital for much of his young childhood. Diligently determined to find a cure for her angel boy, Jared’s mom, Linda, began studying and researching natural medicine and healing and finally found some success. In 1999 he went into remission. We were so blessed to have him in our lives as long as we did. “Nobody’s tough as Jack!!” except for maybe Jared D’Hulst. That was one of Jared’s favorite little phrases and he spouted it out with the same amount of enthusiasm every time. He had many stories, catchphrases, and quotes from movies and tv shows that he privileged his family and friends with hearing every time they saw him. Jared D’Hulst was as tough as Jack…tougher in fact. During his 21 and a half years on this earth, our little JareBear never stopped fighting. He courageously battled cancer from the day he was born until the day he left us and returned to his heavenly home. Jared was one tough little guy. He wasn’t just tough, he was also gentle, meek, loving, and kind. Jared was a giant despite his small 4’2” frame. He loved helping others and thrived on being able to lighten someone else’s burden. Whether it was setting the table, helping his nieces and nephews clean up their toys, to smashing cans at his school job, Jared found great joy in making others smile. He liked making homemade cards are drawing pictures. He colored a picture and gave it to his nephew, William, this past summer, and he was so proud of it! He checked the fridge every time he went to his sister Emily’s house just to make sure it was still there. He often shared how his mommy loved him so much and how she “never, ever” put him down when he was a baby. Jared and his dad loved letting everyone know in on a great and profound secret: “If you’re not Dutch, you’re not much!” They were partners in crime, Jared and his dad…”sneaking” gummi bears, filling up bottles, going on jobs together, and falling asleep on the couch watching TV. Jared’s favorite TV hero was Bob the Builder. He had all the tools he needed to fix anything and everything that needed fixing. He loved wearing his “Bob the Builder” dress up outfit and carrying his tools with him…just in case. He had lots of “just in case” things with him always. Jared's pockets were always filled with cell phones, goodies, papers, keys, treasures of every variety. If something was missing, we knew that Jared might have a good idea of where it ended up. Anyone could see the excitement he had for life through the joy he found in his pocketfuls of wonder. Jared had the beautiful ability to see the good in everyone and in everything. Although he was 21, Jared was a child at heart. His mom said he was her little “Peter Pan.” Jared brought magic and marvel to all of us. Even when his life was hard and the rest of us would have jumped ship a long time ago, Jared kept plugging and bringing light and humor to all those who knew him. He may not have had any grand worldly recognitions, but he had much more. Jared taught his family how to love each other. Jared taught us all how to enjoy each moment in life and stress less about things that don’t matter. Jared taught patience and endurance in the face of adversity. Jared taught about finding beauty in simple things. Jared taught unconditional love. He will be greatly missed. We love you JareBear! Viewing will be held on Tuesday, February 10, 2015 from 5:30p.m. until 8:30p.m. at the Winder 8th Ward, 1361 E 4000 S, Salt Lake City, UT 84124 Funeral services will be Wednesday February 11, 2015 from 12:00 p.m. Until 1:30 p.m. At the Valley View 6th Ward, 3820 S 2000 E, Salt Lake City, UT 84124. Another viewing will be held here before services at 10:30 a.m. Till 11:30 a.m. Interment will be at the Wasatch Lawn Cemetery 3401 S Highland Drive SLC, Utah 84106 A memorial account has been established for anyone wishing to contribute for funeral expenses. Donations will be accepted at any Wells Fargo location under the name Jared D’Hulst memorial fund and at gofundme.com

Brandon JARED D&#8217;Hulst left this world quietly on January 31, 2015 humbly and beautifully, surrounded by those who loved him. His legacy means far more than any earthly successes could even measure. He was a giant among us. Jared&#8217;s... View Obituary & Service Information

The family of Brandon Jared D'hulst created this Life Tributes page to make it easy to share your memories.