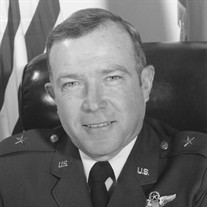 Brigadier General Robert Clay Karns, USAF (Ret.) passed away peacefully in South Jordan, UT the evening of April 20, 2018 after having spent the day in the loving company of his daughter and son-in-law. Robert was born to Merton E. and Glesnore C. Karns in Oswego, KS on May 2nd , 1929 as the older of two boys. A short time later, the Karns family moved to Chetopa, KS. Bob attended Kemper Military School and the University of Arkansas before attending the U.S. Military Academy, West Point, NY. In 1953, upon his graduation from West Point, Bob was commissioned a second lieutenant in the U.S. Air Force. That summer he married his wife of 39 years, Marilyn Perkins Karns. During his 28 year Air Force career, Bob became a pilot and flew combat reconnaissance missions in North Korea and North Vietnam, coached varsity wrestling at the Air Force Academy, traveled to Japan to learn judo, which he then taught at the Academy, earned a master's degree in systems engineering from the Air Force Institute of Technology, and was stationed in numerous locations in the US, from east to west, as well as the UK and Germany. Over his career, Bob earned the lasting friendship and respect of many of those he met both during and after his time in the Air Force. Throughout his life, Bob enjoyed hunting, fishing and skiing with friends. He also loved to travel and share his experiences with his family and others. Numerous people in attendance at the weddings of his grandsons, Sean and Tristan, noted that Bob also enjoyed dancing, in fact, his dance partners had trouble keeping up with him on the dance floor. Bob was preceded in death by his parents, and is survived by his brother Jim of Lexington Kentucky, son Scott and his wife Rita of Santa Fe, NM, his daughter Leslie and her husband Victor Sandoval of Draper, UT, grandchildren Sean and Tristan Karns, Blair and Robert Schumacher, and great grandchildren Josephine and Sebastian Karns. Bob was a dedicated, proud servant to his country, and a loyal friend to many around the world. He is profoundly missed. Bob's family would like to thank the caring staff at Pheasant Run Alzheimer's Special Care Center in South Jordan, UT for their devotion to him in his final months where he was affectionately referred to as “the General”. A special thanks as well to Silverado Hospice for the compassionate care they provided Bob during the 8 months prior to his passing. Services will be held at 1100, April 17, 2019 at Arlington National Cemetery. Memorial contributions may be made to Operation Homefront. Please share memories and condolences at www.serenityfhs.com. Reception to follow service at Joint Base Myer-Henderson Hall, Patton Hall 214 Jackson Avenue Fort Myer, Virginia 22211. Please leave a comment in the condolences for information to RSVP.

Brigadier General Robert Clay Karns, USAF (Ret.) passed away peacefully in South Jordan, UT the evening of April 20, 2018 after having spent the day in the loving company of his daughter and son-in-law. Robert was born to Merton E. and Glesnore... View Obituary & Service Information

The family of Brigadier General Robert Clay Karns created this Life Tributes page to make it easy to share your memories.