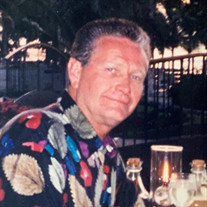 On April 11th, 2019, Bryan Boley Carson, 71, of Victor, Idaho passed away in a single-vehicle traffic accident on I-15 while driving home from a visit with his dear sister, Charlene Long in Sandy, Utah. Bryan was born in American Fork, Utah on March 26th, 1948 to John Charles Carson and LaVerne Boley Carson. He graduated from American Fork High School and went on to travel the country as a crane operator, then electrician and then builder/developer. He spent a lot of time at the Wendell Hansen farm with his friend Randy Hansen and later married Randy’s little sister Cynthia Ruth Hansen. She became the great love of his life. Turbulent and also wonderful together, they had four children, Tiffany, Tyler, Tasha and Tori Jo. They landed in beautiful Moran, Wyoming, part of Grand Teton National Park. There, they raised their four kids with an incredible view of Mount Moran and surrounded by horses, hunting, snowmobiling and mountain life. He started a log home company there with his brother, Rod Carson and family which grew into Jackson Hole Log Homes. He enjoyed developing property in the Jackson area. He built Trumpeter Swan townhouses and then later combined his log cabin expertise with the booming hotel industry and Cowboy Village Resort was born. He and his long time business partner and uncle, Harvey Carson along with close friend and partner, Gary Cole (deceased) found success and fulfillment in this and many other projects. Another partner project was bringing his mini log-cabin concept to Togwottee Mountain Lodge, nationally known snowmobile destination resort. With his “take no bullshit” attitude and larger than life personality, he was truly an original. Bryan loved his family and enjoyed hosting many holidays with his wife, Cindy, in their Jackson home. He enjoyed making homemade chicken and noodle soup (grandpa Chuck’s recipe) and grilling the perfect steak. His kids, nephews and grandkids loved his way of re-telling the incredible stories of his life and were enrapt whenever they could get him talking. He was a true mountain man and we loved to hear about the hunting camp days with him on a horse in the back country, tracking elk, where he was most content. Bryan’s legacy is one of grit, determination and generosity. He spent his retirement in Victor near his youngest daughter Tori Jo and his brother Rod. He enjoyed his Pugs Niko and JoJo, a good John Wayne movie and the Utah Jazz. Bryan leaves behind, his children: Tiffany (Scott) Hamilton of Littleton, NH; Tyler (Jill) Carson of American Fork, UT; Tasha (John) Curry of Scottsdale, AZ; ToriJo (Paul) Kelly of Victor, Idaho. Bryan is also survived by his sister Charlene (Phil) Long, his brother Rod (Robin) Carson and uncle Harvey (Shelley) Carson, 11 grand children with one on the way, one great grand child, and five nephews. Bryan was preceded in death by Cynthia Ruth Hansen Carson and his parents John Charles Carson and LaVerne Boley Roudabush. Services to be held at 12:00 pm Tuesday, April 16th at Cedar Fort Ward, 185 E Center Street, Cedar Fort, Utah. Visitation prior from 11:00 am to 11:45am at the same place. Graveside ceremony at 1:30 pm at the Fairfield Cemetery, Fairfield, Utah. Luncheon to follow at Cedar Fort Ward or at the Fairfield Park as weather permits.

On April 11th, 2019, Bryan Boley Carson, 71, of Victor, Idaho passed away in a single-vehicle traffic accident on I-15 while driving home from a visit with his dear sister, Charlene Long in Sandy, Utah. Bryan was born in American Fork, Utah... View Obituary & Service Information

The family of Bryan Boley Carson created this Life Tributes page to make it easy to share your memories.