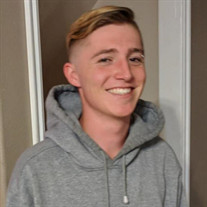 Caleb Avery Hardman passed away in Salt Lake on 2/1/21. He was born on 9/8/98 (such memorable numbers!) and welcomed to the world by birth mother Tracy Freeman plus aunt Randa Briggs, cousin Jolie DeVries and grandma Laura Briggs — and then adoptive parents Linda and Daniel Hardman. Caleb's first years were spent in Pleasant Grove as the 4th of 7 children — a little boy full of curiosity and energy. He was a very early and clear talker. His pockets were full of string and screws. He loved animals, nerf guns, and cool cars. His collection of legos and matchbox cars was impressive. He had a mischievous sense of humor. He constantly took things apart and put them back together again. He had a remarkable talent for seeing and finding things. Caleb's family moved to American Fork while he was still young, and he considered that his home base. He struggled mightily with anxiety, depression, and impulsivity, and this burden grew heavier as he approached teenage years. He lived in several places to seek help. He chased lizards in Hurricane, cared for goats in Cedar City, baled hay and helped foal horses in Koosharem, and spent time in Eagle Mountain, Ogden, and Erda. He learned to ride skateboards and built a half pipe with his uncle. He became a Pittsburgh Steelers fan. He read Dirk Pitt novels and his dad's science fiction. He developed an impressive talent for drawing. He ran a 50-mile relay. He was the proud owner of a fancy Ford Mustang. He graduated from high school early. He worked in construction, landscaping, and at a hardware store. During his travels Caleb spent time with another important family: Kristine Buck, her daughter Hailey Davis, and her son Wyatt Fitzgerald-Buck. They became an additional loving support that he treasured. Caleb also built a deep bond with Dustin Keating, who he considered another brother, as well as other friends and virtual family too numerous to be named. Caleb had a dazzling smile and a tender heart. Although he had a knack for humor that triggered lots of laughter, those who knew him best were familiar with his sadness and frustration. He sometimes lashed out. However, he also showed great kindness, sincerely complimented people, championed the defenseless, and fought bravely to conquer his demons. He apologized and tried to make amends. He fiercely loved his families and close friends. These are the characteristics that best reflect his true nature. Caleb met Trinity Stockholm in late 2019, and they began a life together. He often commented how grateful he was for her, and how very much he loved her. Caleb also reunited with his birth mother and aunt, and found joy in that connection. Caleb is survived by his parents, by six siblings (Ethan, Lauren, Maia, Sean, Dylan, and Genevieve), and by a dog, Sadie, who could barely contain her enthusiasm each time she saw him. We are sure he was embraced by Grandpa Felt, Grandma Laura, Great Grandmas Wilkerson and Hyatt, Tilly, Aunt Janin, and cousins Damon and Gage on the other side.

Caleb Avery Hardman passed away in Salt Lake on 2/1/21. He was born on 9/8/98 (such memorable numbers!) and welcomed to the world by birth mother Tracy Freeman plus aunt Randa Briggs, cousin Jolie DeVries and grandma Laura Briggs &#8212; and... View Obituary & Service Information

The family of Caleb Avery Hardman created this Life Tributes page to make it easy to share your memories.