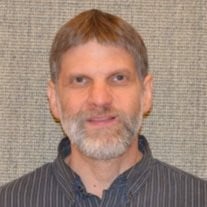 Calvin Bud Eatchel, 51 March 20, 1962 - July 22, 2013 Calvin was the fifth of six children born to Betty and Bud Eatchel. He graduated from South High School in 1980, and later attended Salt Lake Community College in the Electronics and Computer Technology programs. He spent the majority of his career working for Harmon Music Group as an electronic technician and in software development. Calvin served an LDS mission in Manchester England from 1981 to 1983 and served in many church positions including Scout Master, Councilor in his ward Bishopric, member of the High Council, Instructor in his High Priest Group, and in many ward clerk positions. He is survived by his children, Aaron (25), Kelly (23), Ariel (21), Dallin (18), and Megan (13); his parents, Bud and Betty Eatchel; his brothers, Thomas (Dianne), Daniel (Lora), Andrew, and Kenneth (Ann), and his sister Kathryn (Dean Warkentin), and many beloved nieces and nephews. Being an avid outdoorsman, Calvin loved camping, fishing, hiking, and spending time with his children. Nothing in life meant more to him than his children. He frequently neglected his own health and self-interests to make sure that their needs were met. His sacrifices for them knew no bounds. He was deeply loved by his family and friends, and will be sorely missed. A viewing will be held at 8:00 am at the Whittier Ward, 1515 S. 200 E., Salt Lake City, Utah, on Friday, July 26, 2013. Funeral services will immediately follow at 9:00 am in the chapel. Interment in the Salt Lake City Cemetery will be at 10:30 am. In lieu of flowers, the family suggests donations for the children: “Eatchel Donation Fund” at any Wells Fargo branch.

The family of Calvin Bud Eatchel created this Life Tributes page to make it easy to share your memories.