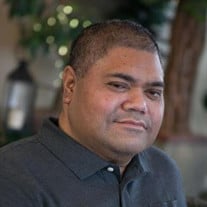 Calvin Isaac Rivers, 49, passed away after a valiant battle with esophageal cancer on April 8th, 2016. He was born February 22nd, 1967 in New Zealand to parents Edward and Toatolu Rivers. Calvin was married to his sweetheart Jennifer McCullough Rivers in the LDS Salt Lake Temple on February 1st, 2006 for time and all eternity. Calvin spent the first eight years of his childhood in New Zealand before moving to Hawaii. He was deeply proud of his Polynesian heritage and its culture. In later years he played for his high school football team, which inspired a lifelong love for the game. He served an honorable LDS mission to the Dominican Republic and returned to begin his career in the field of computer sciences in Salt Lake City, Utah. He truly enjoyed working for DSS Inc. and Informatix and valued the friendships he made there. Calvin took great pleasure in playing golf with his father-in-law, Craig, going to the movies, and considered himself an enthusiastic fan of both Star Wars and Batman. Nothing gave him greater joy than family, especially time spent with his wife and four daughters. No one was a better cheerleader of their accomplishments, whether it was soccer or dance, and he was the first to RSVP for tea parties or a night out for ice cream. His most fervent wish was for his family’s well being and for them to know how deeply he loved all of them. Calvin is survived by his wife Jennifer and their four daughters, mother Toatolu, siblings: Gilbert, Lena (Paul), Chantel, and David, as well as many beloved extended family members. Calvin was preceded in death by his father Edward. The family wishes to extend our deepest gratitude for the extensive efforts of Dr. Justin B. Hohl and staff at TOSH Spinal Institute; Dr. Elizabeth Prystas, Kathy Bowers and all other doctors, nurses, and staff at the Huntsman Cancer Center; Jodi Pierce, doctors and staff at the Cascade at Riverwalk; doctors, nurses, staff, and counselors at Silverado Hospice; Peni at Serenity Funeral Home and its staff; family, friends, neighbors, and our ward for your countless acts of service, and all others who have helped our family for many years. Funeral services will be held at 12 PM on Friday, April 15th, 2016 at the Crescent 12th Ward Meetinghouse, located at 89 East 11000 South, Sandy, UT. In lieu of flowers, donations can be made at https://www.gofundme.com/92ypqu9g on behalf of Calvin’s wife and children.

Calvin Isaac Rivers, 49, passed away after a valiant battle with esophageal cancer on April 8th, 2016. He was born February 22nd, 1967 in New Zealand to parents Edward and Toatolu Rivers. Calvin was married to his sweetheart Jennifer McCullough... View Obituary & Service Information

The family of Calvin Isaac Rivers created this Life Tributes page to make it easy to share your memories.

Calvin Isaac Rivers, 49, passed away after a valiant battle with...