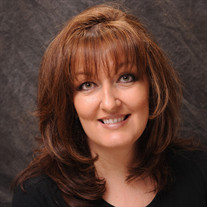 Candace Elaine Salima, 53, left this earthly existence to be with her sweetheart on Saturday, March 25th, in Orem, Utah. She was born on July 26th, 1963 in California, to Muriel Sluyter and Leighton Case. Her parents divorced and shortly after her mother remarried in 1980, she was adopted by Fritz Sluyter, who she always called the Father of Her Heart. She married the love of her life, Alvin Salima in the Bountiful LDS temple on May 4th, 1995. Candace's journey in writing began at age 11 when she started writing original stories because she was bored in school. In college, she chose to study Criminal Justice, but took a creative writing class at Ricks College and within weeks, changed her major to Creative Writing. She focused her energies on screenwriting with the intention of writing and producing movies. She wrote multiple screenplays and learned the ins and outs of the movie business. While waiting on financing for a movie project, she decided to write a book and see what happened. The rest is history. The daughter of a father who survived the invasion of Hitler's war machine in his homeland and a mother who was a conservative columnist, Candace came by her political views and love of this country honestly. She became a very involved player in the Utah political scene and could be found speaking at rallies, working on campaigns and building a large base of politically like-minded friends on socail media. In the course of her life, Candace was a reporter, a writer of health booklets, a screenwriter, a trade show presenter, an office manager, marketer of authors/author services, public speaker, teacher, and president of her own company. Her philosophy in life was simple... everything can be turned into a good story. Hence her nine day rafting trip down the Colorado River, hiking the Colorado Rockies, or horseback riding in the northern Wyoming Greand Tetons. A love of BYU football, basketball, movies, plays, concerts and socializing with family and friends rounded out her life. Candace adhered to the words of 19th century theologian, Tryon Edwards: "If you would thoroughly know anything, you must teach it to others." Candace met her spouse, Alvin Salima at BYU in the early 80s and thus began an epic love story. They finally married in 1995, in their thirties, and became inseparable. Through multiple health problems, they took care of each other, and were finally separated in 2014 when Alvin passed away. She has missed him terribly since then and everyone is rejoicing, through their tears, that they are finally reunited, after two and a half long years. Candace is survived by her mother Muriel Harris Sluyter, her siblings Jay Case, Cash Case, Crystal Anderson, Heather Hunt, Torben Sluyter, Karin Sluyter, Eiren Sluyter, Sven Sluyter, Steven Sluyter, Cheryl Sluyter, and Linda Scanlan, as well as many beloved nieces and nephews. She was preceded in death by her grandparents, her father Fritz Hendrick Sluyter, her husband Alvin, and 8 babies she miscarried, but still named and treasured. Candace's Life Celebration will be held Monday, April 3rd, at 545 N 200 E in Santaquin, UT at the Church of Jesus Christ of Latter Day Saints. The viewing will be from 9:00am-11:30am and the services will be 12:00pm-1:30pm, followed by the interment at the Santaquin City Cemetery where she will be laid to rest next to her eternal sweetheart, Alvin. A special thank you to the Robert and Deon Page family who opened their home to Candace and Linda during the last week of her life to receive hospice care. Services are under the direction of Peni Malohifo'ou of Serenity Funeral Home. Please share memories and condolences at www.serenityfhs.com.

Candace Elaine Salima, 53, left this earthly existence to be with her sweetheart on Saturday, March 25th, in Orem, Utah. She was born on July 26th, 1963 in California, to Muriel Sluyter and Leighton Case. Her parents divorced and shortly after... View Obituary & Service Information

The family of Candace Elaine Salima created this Life Tributes page to make it easy to share your memories.

Candace Elaine Salima, 53, left this earthly existence to be...