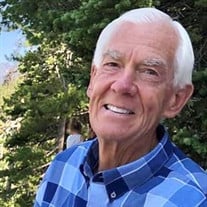 Our beloved father and husband Carl William “Bill” Olson of Highland, Utah, age 84, passed away on August 29, 2021. Bill was born August 10, 1937 in River Heights, Utah, and was the oldest of 5 children. He served a mission for the LDS church for 2 ½ years in Stockholm, Sweden. After returning from his mission, Bill attended Utah State University where he met Linda Marian Bischoff in a chemistry class and they were later married on March 15, 1962, in the Logan, Utah LDS Temple. After graduating from USU with a BS degree in Public Health and a minor in Zoology, Bill went on to receive his Masters in Public Health Administration at the University of MN. Shortly thereafter, Bill and Linda moved to Grants Pass, Oregon where Bill worked as the Administrator of the Josephine County Health Dept. There they lovingly raised 6 children and made lasting friendships. Throughout their marriage, Bill and Linda loved to travel, serve those around them, attend their children’s sporting events, music events, and other activities. Family was very important to them and they especially loved to spend time with their 27 grandchildren. After retirement, Bill and Linda served an 18 mo. LDS mission in Durban, South Africa. After Linda was diagnosed with cancer in 2007, they moved to Highland, Utah. Bill was a devoted husband who loved and cared for Linda before she passed away in 2008. Bill was a devout member of the LDS Church where he served as a bishop twice, in the stake presidency, and also as a stake patriarch, among other callings. He enjoyed his service to our loving Heavenly Father. Bill was blessed to find love again, when he met Margie Lin Ahlman, whom he lovingly called “Margie girl.” Bill and Margie were married February 5, 2010, in the Mt. Timpanogos LDS Temple, and together they kept busy with their combined children, grandchildren, and great grandchildren. They enjoyed birthdays, sporting events, holidays, trips, and attended many activities with their grandchildren. In their 11 1/2 years of marriage, they managed to hold several callings in the LDS church, and were able to serve a mission in Honolulu, HI for 18 months. They fell in love with the Hawaiian culture and made life-long friends. Margie showed compassion throughout all of Bill's treatments, and was there holding his hand until he peacefully passed away. Bill is survived by his wife Margie, his children Marianne (Todd) Stevens, Janette (Bill) Richan, Julee (Greg) Abel, Neil (Emily) Olson, Brian (Shalyse) Olson, and daughter in law, Leslee (Jace) Muramoto, his step-children, David (Natalie) Southwick, Steve (Chalise) Southwick, Brinda (Shad) Slaughter, Brianne (Ryan) Larsen, and Scott (Christina) Southwick, 46 grandchildren, and 17 great grandchildren. Bill was preceded in death by two sons, Vance William Olson, Jared Carl Olson, brother Robert Olson, his parents Grace and Arthur Olson, and his wife Linda. Funeral Service: 9/4 11:00 a.m. Viewings: 9/3 6-8 p.m. and 9/4 9-10:30 a.m. All services will be at the Highland W. Stake Center, 11605 N. 6000 W. Highland, UT Masks are encouraged. For those unable to attend, you can watch the funeral via the following link: https://mywebcast.churchofjesuschrist.org/Events/highlandutahweststake and clicking on “Bill Olson Funeral”. Flowers can be received 9/3, from 5-6 PM at the stake center. Graveside services will be held at the Providence City Cemetery, River Heights, Utah at 3:00 PM.

The family of Carl William Olson created this Life Tributes page to make it easy to share your memories.