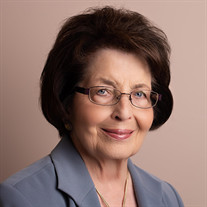 Our beloved Carol Johnson Crist, 84, passed away on Sunday, September 8, 2019, in Provo, Utah. She was born December 25, 1934, in Logan, Utah to Conrad Albert and Norma Monson Johnson and was the oldest of six children. Carol was married to Robert Henry Crist on June 25, 1959, in Logan, Utah and they recently celebrated their 60th wedding anniversary with an evening of music and friends in their home. Carol was raised in Honeyville, Utah with her three sisters and two brothers. She graduated from Box Elder High School with honors, receiving a scholarship to attend Brigham Young University where she earned a degree in Elementary Education. She taught school in Salt Lake City at Rose Park Elementary for two years. Carol was a life-long learner who took college classes throughout her life. With her husband and family, she has lived in Salt Lake City, Los Angeles, Provo, and Orem. Carol had great love for The Church of Jesus Christ of Latter-day Saints, serving in many capacities, mostly with the Primary as pianist, teacher, ward and stake primary president. She and Bob served as Public Affairs/Church Hosting Missionaries, assisting various VIP visitors to Temple Square and other important locations at Church headquarters. Carol was then called to be the Director of Building Hosting in Salt Lake City for Temple Square, Conference Center, the Relief Society building, and Welfare Square. She served in this capacity for five years expanding her list of life-long friends. Carol loved music. She and her three sisters studied piano from an early age and all became accomplished pianists. As a young woman, and later as a mother, she taught piano and was involved in the Melobees, a vocal trio, performing frequently on radio and television. At BYU she sang in the A Cappella Choir and throughout her life she enjoyed singing with many community choral groups. Carol accompanied countless musicians with her piano skills over the years, including her future husband, prior to dating each other. One of the most rewarding and joyful experiences in Carol’s life was being a member of the Mormon Tabernacle Choir from 1985-1995. She and Bob, who was also a member of the choir, were able to travel on tour all over the world. They toured across the continental United States, Canada, Japan, Australia, across Europe- including the former USSR shortly after the fall of the Berlin Wall. She continued to accompany musical performers, including ward members, friends, and grandchildren, until her very recent injury and illness. Carol is survived by her husband, Robert H. Crist, beloved children: Alan Johnson Crist (Leah) of Hampstead, NC, Duane Robert Crist (Pamela), Gilbert, AZ, Brian Edward Crist (Kim) of Orem, UT, Angela Crist of Orem, UT, Thomas Conrad Crist (Shahara) of Orem, UT, and Jennifer Ketchoyian (Ron), of Murray, UT and her loving grandchildren: Brennan (Julia), Alexandra, Alex (Kelsey), Riley, Suzanna (Kevin), Brady, Braden, Chloe, Connor, Jacob (Raquel), Alysa, Gavin, McKenzie, Marisa, Abigail, Ivy, Maya, Robert, Miles, Jackson, and Katie, and two great grandchildren: Crosby and Magnolia, with one more due in November. Carol is also survived by loving sisters and brothers: Judith Hunsaker (Glade), Spencer (Claudia), Kim (Pam), Shauna Samuelson (Scott), and Denice Miller (Jim). She will also be greatly missed by nieces and nephews, cousins, life-long friends, and all who knew her. Carol was an exceptional mother, grandmother, and great-grandmother, and had a unique ability to show individualized attention to each, no matter how many there were, or how tired she became. She was preceded in death by her mother, Norma, who was tragically taken in a drowning accident when Carol was just 33. One of the greatest sorrows of her life was not being able to share the joy of her children with her mother and not having her mother there as grandmother. Also preceded in death by her father, Conrad Johnson and step-mother Dona Johnson. Funeral will be held this Saturday, September 14th, and 11:00 AM, at the Sunset Heights Stake Center (1260 South 400 West, Orem). Viewings will be held the night before, Friday 6-8 pm, and prior to the funeral Saturday, 9:30-10:30 am. Interment to take place at East Lawn Memorial Hills Cemetery.

Our beloved Carol Johnson Crist, 84, passed away on Sunday, September 8, 2019, in Provo, Utah. She was born December 25, 1934, in Logan, Utah to Conrad Albert and Norma Monson Johnson and was the oldest of six children. Carol was married to... View Obituary & Service Information

The family of Carol Johnson Crist created this Life Tributes page to make it easy to share your memories.

Our beloved Carol Johnson Crist, 84, passed away on Sunday, September...