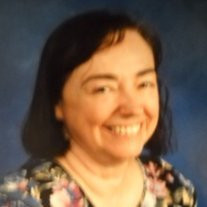 Carol Ann (Gilbert) Dulong 1947 – 2013 Carol Ann (Gilbert) Dulong passed peacefully after a long battle with diabetes. Carol was born September 5, 1947 in Lynn, Massachusetts, daughter of Roscoe Gilbert and Anna Mac Isaac Gilbert. She was married to Alan Dulong in 1969. They have two choice sons, Nathan and Roger. Their earthly union ended in 1993 and have been good friends for a number of years. Carol was a graduate of North Andover High School North Andover, Mass. She entered the medical field as an LPN graduate from Lawrence Vocational School and then went on to graduate from Northern Essex Community College, Haverhill, Mass,, as an RN. Carol dedicated her life to years of nursing in Massachusetts and moved to Utah in 1994 where she continued her career. Carol had a strong interest in midwifery though was not able to enter that specialized field. She developed many preparedness skills and continued to learn throughout her life. Carol is survived by two sisters, Linda Emro of North Andover, Mass, Nancy Emero of Saratoga Springs, Utah, Michael Gilbert of Derry, New Hampshire, son Nathan and his wife, Angelina Bush Dulong and their children, Joshua, Caleb, Benjamin, Eleanor and Beatrice of Sandy, Utah, and Roger who has been her active care taker for the last six years. The family would like give a special thanks to Dr. Kevin Jansen and the staff of the Intermountain Healthcare Dialysis Center in Murray, Utah for their care and dedication in serving Carol for the past three plus years. Viewing with be held on Friday September 6th from 10:00 to 11:30 at the Crescent Park 6th Ward,10885 S. Pampas Dr, (835E) in Sandy. Services will be held at 12:00 p.m.

The family of Carol Ann Gilbert Dulong created this Life Tributes page to make it easy to share your memories.