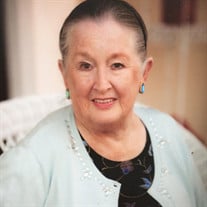 Our loving Mother and Grandmother, Carol Barker Hadley, age 85, passed away at her home in Farmington, Utah on Thursday, January 18, 2018, surrounded by her children. Carol was born, May 29, 1932 in Ogden, Utah, the oldest of two daughters, to Wayne R. Barker and Ina Ross Barker. Carol was married to her High School Sweetheart, J. Rodney Hadley in the Salt Lake Temple on October 30, 1953 by Spencer W. Kimball. Carol grew up in Ogden, Utah where she had so many fond and dear memories. As a child and young teenager, Carol and her sister Joanne would tap dance for the USO and many other organizations. It brought her such joy to tell a those stories of how her Mother would play the piano while they danced, and how many darling costumes their Mother had made for them. Carol graduated from Ogden High School, where she was involved in many school activities and clubs. She then Attended Weber State College, where she was Student Body Vice President, and while in office, had the privilege of digging the first shovel full of dirt for the new College to be build on the hill which is today's site for Weber State University. Carol then attended Brigham Young University but did not have the opportunity to Graduate at that time. Years later, she went back to school at BYU and Graduated at age 53 in 1985, as the oldest Graduate that year. She was so thrilled to walk across that stage to receive her degree. Rod and Carol had four children, one of whom died of SIDS at the age of three months. They raised their three children in Bountiful, Utah and Boise, Idaho, returning to Bountiful in 1968 where Carol lived in her beloved home until 2010. Carol was a loving and devoted Mother and Grandmother. Always involved in our lives and activities. She loved sports and loved going to all of her Sons and Grandsons games. Carol was a working Mother for many years, having a career at Mountain Bell and retiring as the Executive Secretary for the Vice President. This never stopped her from being at our activities, concerts, or recitals. Carol was a beloved Mutual Teacher in both Boise and Bountiful. She loved the Gospel of Jesus Christ of Latter Day Saints, and had so much knowledge of our Pioneer history. She was exceptionally talented with hand work, making many quilts, afghans, and needlepoint works of art. She had a love of Nature and of Animals, which she passed down to her Children and Grandchildren. Carol and her Daughter Nancy moved to Farmington, Utah in 2014 where she was filled with peace and joy. Her final years were spent sitting on her front porch with her dog Shamus, where she made many friends and acquaintances. She loved looking up at Flag Rock Mountain, right outside her front door, and seeing the mountain turn pink at sunset, and watching the moon rise over the mountain illuminating the flag. This was Heaven on Earth to her! She loved her " Natures Rides " every Sunday morning to Farmington Pond and Farmington Bay, where she could watch the ducks and birds and horses, and see the changing of the seasons. Carol loved her Children and Grandchildren so much, and was so proud of each of their accomplishments. She had an individual relationship with each one of her Grandchildren, which was so special to her. Mom was so loved by all of us, and will always be in our hearts! Carol is preceded in death by her infant son, David, and her Husband of 57 years, Rod Hadley. Carol is survived by her Children: Rick and Ellen Eads Hadley, Nancy Hadley, Jon and Mary Taylor Hadley, and beloved Grandchildren: Kate, Jacob, who is currently serving an LDS Mission in Fiji, Cody, McKay and Austin. Sister: Joanne (Alan) Dayley of South Ogden. Graveside Services will be held Thursday, January 25, 2018 at 11:00 a.m. at the Bountiful City Cemetery. The Services will be handled by Serenity Funeral Home, with our Cousin Mike Hadley officiating. Our family would like to Thank the staff at Orchard Cove Rehabilitation, and Horizon Hospice Care, for the kind and loving care they gave our Mother in her last months and days. We are so grateful for all who were a part of her care. " MOM is LOVE"

Our loving Mother and Grandmother, Carol Barker Hadley, age 85, passed away at her home in Farmington, Utah on Thursday, January 18, 2018, surrounded by her children. Carol was born, May 29, 1932 in Ogden, Utah, the oldest of two daughters,... View Obituary & Service Information

The family of Carol Barker Hadley created this Life Tributes page to make it easy to share your memories.