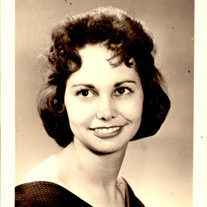 Carol Joan Lofgren, 82, passed away peacefully on April 23, 2022 at her home in Utah. Carol was born on February 27, 1940 in Pulaski, Iowa to Samuel C. Brown and Charlotte E. Brown. She was united in marriage to Roger E. Lofgren on September 8, 1962 in Downers Grove, Illinois. Carol graduated from Salix High School in Salix, Iowa in 1958. She then went on to receive her Bachelors of Science Degree from Parsons College in Fairfield, Iowa in 1962. Carol and Roger raised their son, Brock, and daughter, Dawn, in various locations in Minnesota and Northern Illinois. While her children were young, Carol was a homemaker. When they were older, Carol worked in various administrative positions over the years. Carol and Roger then retired to Arizona where they enjoyed the beautiful weather. After Roger’s passing, Carol lived with her daughter Dawn for a time, then settled with her son Brock in Utah until her passing. Carol was an avid reader who also enjoyed crossword and jigsaw puzzles. Carol loved playing cards and table games with her family and friends. Dawn had a hard time beating her at Scrabble and Brock had the same challenge with their nightly game of Yahtzee. Carol also loved being outside in her garden. Nothing tasted better to Carol than fresh tomatoes and sweet corn. Carol was a devoted mother and loving wife, known by all for her gentle and kind spirit. Carol is survived by her son Brock, daughter Dawn (Steve Penny), grandsons Scott Penny, Kevin Penny and many nieces and nephews and their families. Carol was preceded in death by her husband Roger, her parents, her brother Samuel B. Brown, her sister-in law Kay Brown, her brother Craig W. Brown and her sister-in-law Donna Brown. Carol will be laid to rest next to her loving husband at Scandinavian Cemetery, Rockford, Illinois. Please share memories and condolences at www.serenityfhs.com.

Carol Joan Lofgren, 82, passed away peacefully on April 23, 2022 at her home in Utah. Carol was born on February 27, 1940 in Pulaski, Iowa to Samuel C. Brown and Charlotte E. Brown. She was united in marriage to Roger E. Lofgren on September... View Obituary & Service Information

The family of Carol Joan Lofgren created this Life Tributes page to make it easy to share your memories.