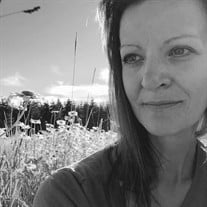 Carrie Anne Anderson, 50, was released from pain January 29, 2019 after a long and hard fight against cancer. She was surrounded by the love of her family and friends in West Jordan as she took her last breath, leaving many broken hearts. She was born May 17, 1968 and was raised by Edward and Kathleen Naylor along with three brothers: William, Ronald and Kevin Naylor. Carrie Anne married and divorced Harry W Hellam III at a young age, raising her son as a single parent; always striving to make a better life for her small family. This led her to move from place to place experiencing new areas, searching for her happiness. She had many loves and friends along the way, ultimately deciding to use her personal experiences to help others. Carrie Anne went back to school in Oregon earning multiple degrees and certificates out of her desire and passion for helping others, especially those battling addiction and abuse. Though she loved what she did, the births of her grandchildren tugged at her heart. She decided to give up her working life in favor of being a full-time "Memaw" (Grandma). Shortly after moving back to Utah, Carrie Anne was diagnosed with terminal cancer. Determined to live her life to it's fullest, she doubled down her efforts to share as much love as she could with those around her. Carrie Anne selflessly moved in with her son and his family to help in raising her "littles" (grandchildren) which allowed her son to pursue his dreams and making her extremely proud of his own selfless choice. Carrie Anne lived a life of compassion, love, respect for others and was a selfless and beautiful soul. She poured herself and her passions into her grandchildren. Carrie Anne fought for years against her cancer, refusing to give up so that she could be with them, calling them the light of her life. She was fearless and courageous stating that she wasn't scared to die, but that she was not ready because she knew she had so much love left to give to the world. The pain and suffering eventually became too much for even her strong spirit. She is survived by her loving parents, Edward and Kathleen Naylor; her son and his wife, Harry and Michelle Hellam; Grandchildren, Edward, Harrison, and Abigail Hellam; Many loving brothers, cousins, aunts, uncles and friends. Services will be held later in the spring to celebrate the life she led and the memories she is leaving in our hearts. Thank you to Serenity Funeral Home Services and the hospice medical staff for the loving care provided to Carrie Anne during her last days to make her as comfortable as possible.

Carrie Anne Anderson, 50, was released from pain January 29, 2019 after a long and hard fight against cancer. She was surrounded by the love of her family and friends in West Jordan as she took her last breath, leaving many broken hearts. She... View Obituary & Service Information

The family of Carrie Anne Anderson created this Life Tributes page to make it easy to share your memories.