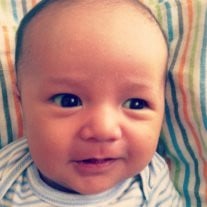 Carter Kauri Terata Tui'one, peacefully slipped into the realm of the angels, cradled in the loving arms of his parents, Samuela Tupou Herbert & Victoria Nikki (née Phillips) Tui'one. His valiant and courageous fight ended on the evening of August 4, 2013, in the PICU of Primary Children's Medical Center. Carter, our little trooper is survived, loved, and missed by his parents, sister; Calia, paternal grandparents, Stanley and Auola Tui'one, maternal grandparents, Sela and Nicodemus Phillips, cousins, aunts, uncles, grand aunties and uncles, and great grandmother Matelita Vika Maumau. It was absolute love at first sight to behold him at birth, a beautiful face that changed as his illness took over. His placid and sweet demeanor endeared him to our hearts and captured the hearts of not only his family, but all those who visited him in the hospital and who followed his brief life through social media, #carterstrong. He exemplified an inner strength, and a fighting spirit beyond his mere age as he quietly endured numerous operations and as it seemed to him, "endless blood draws." At times it seemed he knew his parents were quietly suffering by his side and smiled at them as if to say, "it's alright mum and dad, I'm just fine." At such a young age he knew and understood his sisters bright personality and learned to close his eyes and ears to her cries and the constant territorial quests of Calia and Koa. At times when their noise was unbearable, it just made sense to cry along with them. From birth, he loved to be cuddled and loved to be held by his Mum which brought much comfort to him. His life was a brief gift that will remain a constant reminder of how we should live, courageously enduring the trials of this life. "God saw him getting tired, a cure was not to be, He wrapped him in his loving arms and whispered, "Come To Me" He suffered much in silence, his spirit did not bend He faced his pain with courage, until the very end He tried so hard to stay with us but his fight was not in vain God took him to his loving home and freed him from his pain" We will bid farewell to our handsome fighter, Friday, August 9, 2013 with a public walk thru viewing from 9:30 a.m. - 11:30 a.m. Services will commence at 12 noon - 1:00 p.m. Viewing & Services to be held at Glenmoor Stake Center, Skye Dr. (9800 S.) 4200 west. Interment directly after service at Riverton Cemetery, 1500 W. 13200 S. Services are under the direction of Peni Malohifo'ou of Serenicare funeral home Draper Utah

Carter Kauri Terata Tui'one, peacefully slipped into the realm of the angels, cradled in the loving arms of his parents, Samuela Tupou Herbert & Victoria Nikki (née Phillips) Tui'one. His valiant and courageous fight ended on the evening of... View Obituary & Service Information

The family of Carter Kauri Terata Tui'one created this Life Tributes page to make it easy to share your memories.