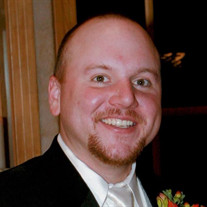 Chad Davis, 36, was born December 13, 1981 to James L Davis and Kimberlie G Bartschi in Salt Lake City Utah. He passed away unexpectedly on January 24, 2018. Chad attended Granite High School where he started a band with some of his best friends. He was a very talented bass guitar player and dreamed of making it big someday. He loved all music, especially Iron Maiden. Chad was full of life and made friends everywhere he went. He was bigger than life and when he entered the room you could feel his energy! He met his best friend Shannon Mariani while they were both working at Home Depot. It was love at first sight for both of them. They married in 2007, and soon after had their daughter Isabella. Chad was a fun and generous Dad! He spoiled his “Belly B” beyond belief. She was the love of his life and he was so proud of his beautiful, energetic daughter. He loved being her Dad! Chad suffered most of his life with severe anxiety and because of this he self medicated. He was an alcoholic, and this disease unfortunately took over his life. He wanted more than anything to overcome this disease to be the best Father and Husband possible. He was most recently employed with Salt Lake City, Corp. He loved the job and the people he worked with. He was hoping that this would become his career. Chad is survived by his wife Shannon; Daughter, Isabella; Parents, Jim Davis and Kim Dixon; Brother, Jeremy; Grandparents, Farrell & Karren Bartschi; Grandfather, Verne Davis; Parents-in-law, Kelly & Heidi Mariani; Brother-in-law, Kory (Raynee) Mariani; Sisters-in-law Michelle (Patrick) Aleki; Jessica Osman; and many Aunts, Uncles and Cousins. Chad was proceeded in death by his Grandmothers, Bettie Bartschi and LaVon Tamplin. The family would like to thank Serenity Funeral Home for their generous care and compassion. In lieu of flowers, please make a donation for funeral expenses to https://www.youcaring.com/kimberlydixon-1079048. Funeral services will be held at 11:00 a.m., Wednesday, January 31, 2018 at the LDS Church, 1380 W. 6720 S. West Jordan. Friends and family may call from 6-8 p.m., Tuesday, January 30, 2018 at Serenity Funeral Home, 12278 S. Lone Peak Parkway, #103, Draper, and from 10-10:45 a.m., Wednesday at the church. Interment at the Memorial Redwood Cemetery.

Chad Davis, 36, was born December 13, 1981 to James L Davis and Kimberlie G Bartschi in Salt Lake City Utah. He passed away unexpectedly on January 24, 2018. Chad attended Granite High School where he started a band with some of his best friends.... View Obituary & Service Information

The family of Chad James Davis created this Life Tributes page to make it easy to share your memories.