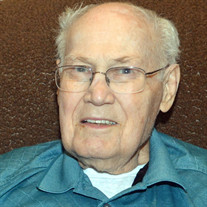 Bud McConnehey, 91, long-time resident of South Jordan, passed away in Medford Oregon November 30, 2017. Born in Spokane Washington on August 6, 1926, he was the son of Paul and Florence (Reeder) McConnehey. He was a child during the Great Depression, and as part of the Greatest Generation he joined the United States Navy in World War II and served in the Pacific theater. After the war ended, he returned to Spokane; where he met and married Mary Ann Henderson (November 28, 1946, later solemnized in the Los Angeles LDS temple). He remained in the Navy reserves after World War II, returning to active duty and finishing his career with the Navy in 1973 as an E-9 Master Chief. He was stationed in various places on the east and west coasts and in Yokohama and Okinawa. Highlights include serving on the U.S.S Ranger and the U.S.S. Blue Ridge, and as an instructor at N.T.C. San Diego. While serving on the U.S.S French in World War II, he took part in the recovery effort for the U.S.S Indianapolis. His was an active and devoted member of the Church of Jesus Christ of Latter-day Saints. His passion was music, serving in and directing many church choirs. He also enjoyed tuning pianos and repairing organs. He is survived by his daughter, Patricia (Jim) Walsh of Jerome ID, and sons, Dennis (Kathy) McConnehey of West Jordan and Bruce (Cheryl) McConnehey of Central Point OR, and 18 grandchildren over 30 great-grandchildren. He was preceded in death by his parents, his sister, Julia “Dolly” Medcalf, his wife, Mary Ann, and his daughter, Kathleen (Schick). Funeral services will be held Monday, December 11, at 12:00 Noon (viewing from 10:30-11:30) at the West Jordan 19th Ward LDS Chapel, 2666 West 7000 South, West Jordan, Utah. He will be interred next to his wife at the Camp Williams V.A. cemetery.

Bud McConnehey, 91, long-time resident of South Jordan, passed away in Medford Oregon November 30, 2017. Born in Spokane Washington on August 6, 1926, he was the son of Paul and Florence (Reeder) McConnehey. He was a child during the Great Depression,... View Obituary & Service Information

The family of Charles "Bud" Robert McConnehey created this Life Tributes page to make it easy to share your memories.