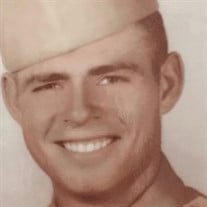 Obituary for Charles Carmen Stuart Charles “Chuck” Carmen Stuart, 87, died peacefully on June 14, 2022 surrounded by his family in Eagle Mountain, Utah. Chuck married Carol Jean Bell on June 28, 1957 and was just about to celebrate 65 years of marriage. Together they raised seven children, and had 25 grandchildren and 30 great-grandchildren. Working in retail sales, Chuck retired in 2001 where he would go on to dedicate his life to service by serving several missions for the Church of Jesus Christ of Latter-day Saints in Australia, Michigan, and Utah with his sweetheart, Carol. His hobbies included making his children and grandchildren laugh so hard they cried, and working on family history. Additionally, Chuck served in South Korea and Japan and is a United States Veteran. Chuck leaves behind his wife Carol, sons Chuck (April), Mark, Darren (Tamara), Lynn (Tina), Ryan (Mikki) and daughters Debbie (Earl) Gee and Amy (David) Bohman, along with his grandchildren and great-grandchildren. To describe Chuck as an example of strength and service is an understatement. He had no guile, loved wholly and completely, and epitomized the definition of charity. He gave when he had nothing to give, always thought of others before himself, and looked for ways to serve. He is considered a hero to his children and grandchildren, not because of what he did or what he had but because of who he was. He loved and was loved and his legacy of selfless sacrifice and service lives on in his posterity and he will forever be revered among family and friends. Charles was preceded in death by his parents William and Myrtle Stuart, brothers Eugene, Ernest, and Lamar, and great grandson Rex Stuart. Services will be held on Tuesday, June 21st at 10:00 AM at the Church of Jesus Christ of Latter-day Saints on 4561 N Buckboard St Eagle Mountain UT 84005 Viewing is from 9:00 AM- 9:45 AM.

The family of Charles Carmen Stuart created this Life Tributes page to make it easy to share your memories.