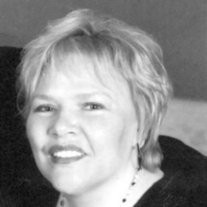 Christine Eve Mueller Buckner 1971 ~ 2013 Our beloved wife, mother, sister & daughter, passed away on Sept. 18, 2013. She was born on Sept. 23, 1971 in Murray, Utah, daughter of George G. Mueller and Johanna G. Mueller. On Nov. 9, 1996 she married Bryan D. Buckner in the Salt Lake LDS Temple. Christine attended Salt Lake Community College and earned an Associate's of Science degree. She later attended Westminster University and earned a Bachelor's of Science in Accounting. Christine was always thinking of others, very patriotic, very devoted to her family, generous in service and character, always joking and made people smile. She was helpful, very talented with crafts, spiritual, loving and honorably served her country in the Navy. Christine is survived by her husband, Bryan D. Buckner, her daughter, Kyleen; mother and father in law, Cheryl A. Buckner & Ronald D. Buckner; parents, George G. Mueller & Anita Mueller, Johanna G. Mueller & her siblings, Sandy, Rob, Caroline & Conny. We will miss you Chrissy and will always keep you in our hearts.Family and friends are invited to a viewing for Christine on Tuesday, September 24, 2013 from 6:00-8:00 pm and from 10:00-10:45 am on Wednesday, September 25, 2013 at the Valley View Ward, 5180 West 4700 South, West Valley City, Utah. Services will follow at 11:00 am. In lieu of flowers, Deposits can be made at any America First Credit Union under Christine Mueller Buckner Memorial Account.

The family of Christine Eve Mueller Buckner created this Life Tributes page to make it easy to share your memories.