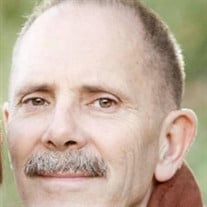 Funeral Webcast Link: http://mywebcast.churchofjesuschrist.org/saltlakehuntercopperhillstake Christopher Royal Terry, age 70, passed away on the 16th of February 2021, in West Valley City, Utah from a heart attack. He was born 19th of March 1950 in Cedar City, Utah to Farrell and Jeanne Terry. He married Sandy Peterson and was married in Woodland Hills, Utah on the 6th of September 1986. They were sealed for time and all eternity on 6th September 2019 in the Mt. Timpanogas Temple. Christopher, also lovingly known as Papa, Christopher B. Hayes, C.T., and Raoul, was raised in Orem, Utah by his mother, Jeanne. Considered the “liveliest of her lively children” he had his adventurous spirit and fun-loving nature from a very young age as he and his brothers romped around the mountains and orchards that surrounded his home. He had a great love of music and collected it in all forms, and had a wonderful tenor voice and enjoyed singing and playing his guitar. As a young man, he served an LDS mission in Japan where he learned to love the people and the language. He loved learning, and continued his education throughout his life. Though he worked on computer systems for a living, he was incredibly intelligent and gifted in many areas – he could do anything from reciting a calculus formula from memory to fixing any household fixture or appliance. He was a handyman, mechanic, computer whiz, master griller, and expert storyteller all in one. Always ready with a joke and a helping hand, he lived his last moments the way he lived his life – in service to others. He cared deeply about his faith and his family, and felt a strong responsibility to give back to others. He loved being a husband and dad, and loved being a grandfather even more. He loved working on his little red car, and had a proclivity for collecting mugs, pens, and flashlights. We will be forever grateful for the surgeons and doctors who gave us 11 more years after his heart condition was diagnosed to be with our beloved husband, father, and grandfather. It was not long enough on this earth, but we look forward to being together again in the eternities. Survived by: His wife, Sandy; Children, Nicholas (Lacey), Jake (Valerie), Meghan, and Madison; Grandchildren, Oliver and Kairi; Siblings, Mike (Trish), Tim (Linda), Dennis (Joyce), Kelly, and Marya (Rob). Preceded in death by: Brothers, Thomas Kevin and Patrick; Father, Farrell; Mother, Jeanne. A service will be held Monday, the 22nd of February at 11 a.m. at the Salt Lake Hunter Copperhill Stake Meetinghouse located at 6710 West 4145 South, West Valley City, Utah, 84128. A private, family-only viewing will be held at 10 a.m. He will be buried at the Orem City Cemetery located at 1520 North 800 East, Orem, Utah, 84097. Thank you. Please share memories and condolences at www.serenityfhs.com

The family of Christopher Royal Terry created this Life Tributes page to make it easy to share your memories.