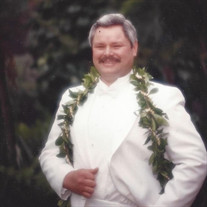 Clayton Kaoao Forsythe, age 63, passed away in Provo, Utah. May 30, 2018. Clayton was born October 2nd 1954 in Wahiawa, Oah’u, Hawaii to Edward William and Ruth Kauihou Bannister Forsythe. He graduated from Honokaa High School, but considered himself a Red Raider. After graduation, he attended Ricks College in Rexburg, Idaho where he was a decorated member of the football team. After two years, he decided to put his football career on hold and serve a mission. Clayton served in the Dallas/Fort Worth Texas mission. During his mission he had a strong prompting that he would return to the area, and he eventually did. After his mission, Clayton attended BYU and played Guard for the Cougars. During his time there the Cougars were two-time WAC champions and attended the Holiday and Poinsettia bowls. Clayton went on to meet his sweetheart, Kristine Hawkins. They were sealed in the Salt Lake City temple March 21, 1990. They returned to the Dallas/Fort Worth area where he was working for American Airlines as an aircraft mechanic. In 1992, he received a degree in Business Administration from Embry-Riddle Aeronautical University. Clayton and Kristine had three sons, Dalton (26), Dillon (24), and David (21). For many years they enjoyed watching them compete in various sports, and Clayton even adjusted his work schedule to be able to attend. Clayton served faithfully in various callings for The Church of Jesus Christ of Latter-day Saints, including seven different bishoprics and many years in the Boy Scouts. In his later years, Clayton volunteered for the Civil Air Patrol and served as a Logistics and Flight Release Officer. He loved anything related to flying. Clayton was a devoted and hardworking husband, father and grandfather. He would video chat with his granddaughter Avery June whenever he could. Clayton is preceded in death by his parents, Edward William and Ruth Kauihou Bannister Forsythe. He is survived by his wife of 28 years, Kristine Forsythe; His sons Dalton Kaoao Forsythe (Madison), Dillon Keikepono Forsythe, David Kekoamaikalani Forsythe; his granddaughter Avery June Noelani Forsythe; his sisters Roxanne (Ken) Galeai, Ronette (Voi) Taeoalii and Robin (Richard) Maiava and many nieces and nephews. Services are under the direction of Peni Malohifo'ou of Serenity Funeral Home Services will be held Saturday, June 9th in the Pleasant View Chapel (650 E Stadium Avenue) in Provo. The viewing will begin at 9 a.m. and services will start at 11:00. An additional service will take place July 2nd at the Waialua, Oahu Chapel. After which he will have a graveside service at the Laie Cemetery.

The family of Clayton Kaoao Forsythe created this Life Tributes page to make it easy to share your memories.

Clayton Kaoao Forsythe, age 63, passed away in Provo, Utah. May...