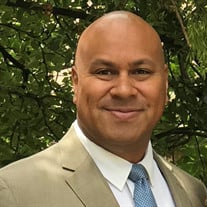 Clinton John Afafa’alogo Tu’ua passed away unexpectedly on Wednesday, September 26, 2018 in Provo, Utah. Clinton was born August 14, 1973 in San Diego, California. He is survived by his lovely wife, Teuila and children Ilamarie, Finau, Nelesoni, Roscoe, Derrick, Clinton Tavake, and Wolfgramm. He is also survived by his mother, Vika Lataheanga Tu’ua; siblings De Von, Ernest, Siliga, Charles, Richard, Laura Vi, and Moana. Preceded in death by his father, Nelesoni, and older, sister Meletoto. Funeral services will be held on Friday, October 5, 2018 at the Provo Utah Sharon East Stake 2400 N 1060 E, Provo, Utah. Viewing is 10:30am-12:00pm. Funeral is 12:30pm-1:30pm. He will be laid to rest at East Lawn Memorial Hills Cemetery. ***We invite you to post tributes on this site. This is one of the ways we will gather stories/tributes/photos Teuila will share with her children about their father.

The family of Clinton John Afafa'alogo Tu'ua created this Life Tributes page to make it easy to share your memories.