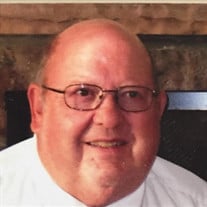 Clyde R Lamoreaux, 78, quietly passed away on April 23, in his home surrounded by loved ones. Clyde was born in Cedar City, Utah, to Bub and Erma Lamoreaux. Clyde married Helen Mae Decker of Parowan. They were married in the St. George Temple, on June 3, 1960. Clyde’s Life: He grew up tough and overcame much adversity in his young life. At the age of 9, he was stricken with Polio and was in the hospital for 3 months. His mother, Erma would travel for four hours once a week to see him for an hour and then return back to Paragonah and await the next week’s visit. In his younger years he worked on his Grandpa’s farm “forking hay”, feeding chickens, herding sheep and tending the garden. Clyde played football in high school, and was noted for his tenacity. After high school, he went to Utah Technical College in Provo. He graduated with his diploma in auto body repair the same night as Helen graduated high school. They were married the next weekend in the St. George Temple. He was extremely close with his family as they learned to do most everything together. He was an avid hunter and fisherman and spent much of his time in the mountains, or on the banks of local lakes. Some of his favorite activities included coaching and watching any sports game on TV or in person. He coached several championship teams in variety of sports because of his ability to recognize and capitalize on talent. Clyde and Helen served a mission in Salt Lake City wherein they helped to oversee the preparation of various types of humanitarian kits (hygiene, school supplies, emergency preparedness, etc.) to send throughout the world. Survived by: Wife Helen, Children: Leon (Kim) Lamoreaux, Chris Wall, Darryl Lamoreaux, 8 Grandchildren and 14 Great Grand Children. He has one sister Laura (Donald) Burton. His family is scattered far and wide across the country. Preceded in death by: His parents, Errol (Bub) and Erma Lamoreaux and daughter Sheryl Lamoreaux. Service Information: Viewing and celebration of life will be Friday, April 27, 2018 from 10:00 to 11:30 at the LDS Church house located at 3315 W. 5620 S. in Taylorsville. Grave side service and internment will be at the Paragonah Cemetery at approximately 4:00 PM. Thank you. We wish to thank all of the health care professionals that have provided such compassionate care and the neighbors, friends and ward members that have provided meals and emotional and spiritual support.

Clyde R Lamoreaux, 78, quietly passed away on April 23, in his home surrounded by loved ones. Clyde was born in Cedar City, Utah, to Bub and Erma Lamoreaux. Clyde married Helen Mae Decker of Parowan. They were married in the St. George Temple,... View Obituary & Service Information

The family of Clyde R Lamoreaux created this Life Tributes page to make it easy to share your memories.